Strong demand for industrial and retail warehousing continues in Scotland’s commercial property market. Research by the property consultancy Frank Knight has revealed that last year investment in the sector was up over 20% compared with the year before, indicating a concerted post-pandemic rebound. The market in Scotland should benefit in the longer term from a widespread trend among companies to expand their industrial sites away from the overheated, overcrowded South East of England.

Glasgow, as Scotland’s principal industrial centre and largest city, is perfectly placed to capitalise on sector growth and change. Its impressive harbour and modern port facilities make it a major import and export hub, and the city’s industrial roots run deep. Historically a great shipbuilding and steel producing centre, Glasgow remains vital to many British sectors, such as satellite and aircraft technology, electronics, food and drink. It is also a city at the forefront of low carbon innovations and renewable energy, and hosts cutting-edge collaboration between academia, business and the public sector into the development and production of pharmaceuticals and biotechnology.

Incredibly lively, diverse, and a notable centre for higher education, Glasgow is a textbook example of a modern industrial and business hub, risen from the remnants of a world famous traditional industrial powerhouse. A series of modern business and industrial estates are home to numerous small firms, while other organisations have moved into Glasgow’s nearby new towns. Potential for future growth and development is huge. 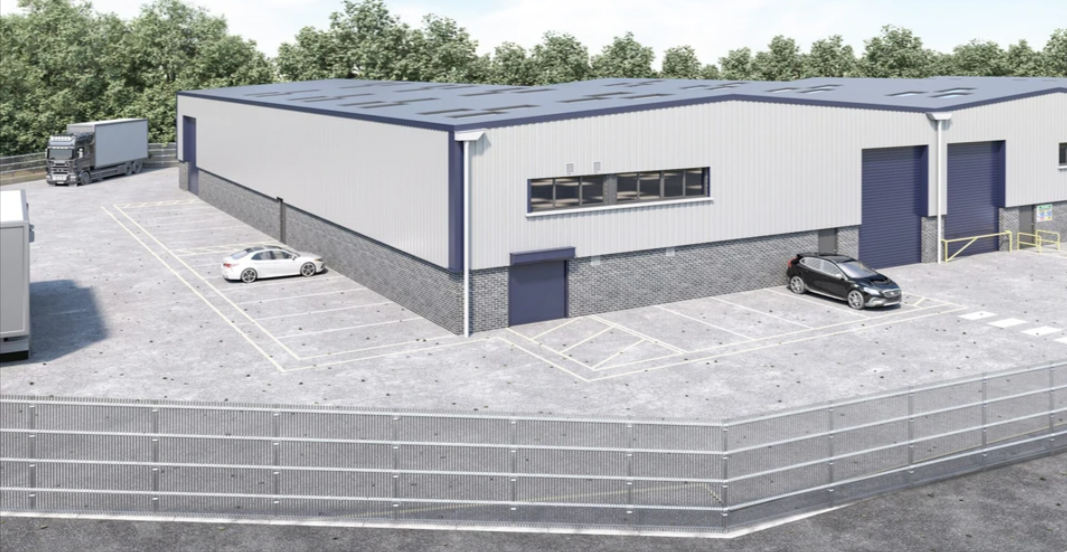 Industrial space in and around Glasgow

Crucially, despite its stature, heritage, communication links and the variety of industrial space available, the average price for industrial rents in Glasgow is just £5.96, compared with up to £20 in and around London. Over 12,000 companies call Glasgow home – with good reason. Prestigious tenants include Glasgow Science Centre, the Biotechnology Innovation Centre, Ministry of Defence, J.P. Morgan and Zurich Insurance.

From Boden Street Industrial Estate in the district of Bridgeton, to the Alpha Business Centre on Clydebank, there are options for every sector and scale of company. Just over a mile from the city centre and close to the M74 and M8 motorways, St Andrews Industrial Estate encompasses nine units spread over 72,000 sq ft. Clydeside Industrial Estate, located on South Street by the river, is a thriving, spacious site, while six miles west of the city centre you’ll find Hillington Industrial Estate, with a choice of industrial and warehouse units, complete with ancillary office space, loading bays and dedicated parking.

As Scotland’s largest city and busiest industrial hub, Glasgow is served extremely well by the road network. In fact, the motorway network is one of the best developed in the UK, connecting central Glasgow to the extensive Greater Glasgow area. The M8 is Scotland’s busiest Motorway, running right through the centre and connecting with Edinburgh to the east. Additionally, the M74 runs from the city centre to the South East – a major route out towards the border and England.

Glasgow’s rail network is one of the most complex outside London. There are no fewer than 186 stations in the Greater Glasgow area. Glasgow Central station primarily serves routes that head south of the city and into the rest of the UK. These routes connect the city to a whole network of major cities, such as Manchester, Birmingham and London. The station at Queen Street connects to the suburban lines that run east and west across the city, and to the north of Scotland.

Glasgow is one of just three British metropolitan areas with its own underground metro system – the others being London and Newcastle. The Glasgow Subway has a history stretching back to 1896, and follows a single circular route around the city. Any businesses looking to the city as a base will find that industrial properties in Glasgow are supported by exceptional rail links in every direction.

Glasgow’s bus network provides a huge range of local and intercity routes. The city council has developed a system of ‘bus corridors’ on the most important routes, giving priority to buses and providing passengers with real-time information. Buchanan bus station is the terminus for both local and long-distance routes.

Glasgow Prestwick Airport is 29 miles south of the city and focuses on short-haul flights into Europe, freight traffic and low-cost airlines. The Seaplane Terminal is in the heart of the city on the River Clyde, and provides services to the Scottish Islands and the far north. The Glasgow area also has small airfields in Cumbernauld and Strathaven.

As you would expect of a city with international prominence and a strong emphasis on business and industry, Glasgow offers a wealth of hotels of every kind, from low cost and short stay, to mid-range and highly prestigious.

Affordable convenient chains such as Travelodge have a number of hotels around Glasgow, from the outskirts to the centre.

For a premium-level hotel, you could consider the luxurious Native Glasgow, based in an elegant Edwardian house that was once the HQ for the Anchor Line Shipping Company, or the five-star One Devonshire Gardens in the West End.

A large, comfortable and well-equipped modern alternative is the Courtyard by Marriott Glasgow SEC, located just 100 metres from the Hydro, on Stobcross Road.

Famous for its industrial spaces, Glasgow is equally well known for its popular and varied shopping districts. In the heart of the city, Buchanan Street is Glasgow’s main pedestrianised shopping area, lined with top brands and flagship stores, such as Apple, Nike and the original House of Fraser store, founded in Glasgow in 1849.

The glorious Argyll Arcade is another Glasgow retail highlight. One of Europe’s oldest, covered shopping arcades, it is home to a selection of prestigious jewellers and diamond merchants.

There is a wealth of different meeting rooms and venues around the city, each served by Glasgow’s excellent transport network. The Scottish Event Campus contains five interconnected exhibition and meeting spaces, SEC Armadillo and the OVO Hydro. On a smaller scale, Regus offer four Glasgow meeting locations, with onsite support teams. The studio offers meetings and event spaces in their conference venue based in Glasgow’s city centre.

From top events and festivals, to a huge array of characterful bars, pubs and restaurants, Glasgow is a legendary centre for nightlife and entertainment. Music venues range from the epic OVO Hydro and O2 Academy, to intimate specialist spots such as The Glad Café and Mono. There are restaurants catering for all tastes and budgets, including Michelin Guide favourites such as Gamba, a long established seafood restaurant in the city centre and Cail Bruich, with its Michelin Star-winning seasonal, Scottish menu.

Find your next industrial space in Glasgow

The future of industrial space in Glasgow

Industry has always been a major part of Glasgow’s identity and profile: through the eras of steel and shipbuilding, right up to the advanced sectors that make the city their home today. It is this huge rise in low-carbon industries, life sciences, tourism, advanced engineering and design, finance, business and higher education that powers demand for good industrial space. Glasgow is at the forefront in these growing, vital sectors with a global reputation for excellence. It is now among the top 15 European Financial Centres, and the University of Strathclyde is creating an £89 million Technology and Innovation Centre, right in the heart of the city.

Cosmopolitan, vibrant and very well served by transport links, Glasgow retains its industrial identity, whilst reinventing itself for a sustainable, technology-led future. The demand for industrial space can only rise with the city’s vibrant, innovative profile.