Find your next industrial property to rent in Liverpool

Discover your next industrial property in Liverpool

Situated on the eastern side of the Mersey Estuary is Liverpool, a city steeped in maritime history, and boasting a thriving economy and vibrant arts, culture and music scene.

Its unique location on the mouth of the river Mersey, at the point where it meets the busy shipping lanes of the Irish Sea, enabled the city to become the north of England’s leading port. While the port continues to play a prominent role in the city’s economy, today Liverpool is also at the heart of the UK's chemical, aerospace manufacturing and production industries, and plays host to the second biggest digital industry cluster in Europe. The city is also now home to car manufacturing and a burgeoning retail and film industry. This business hub is only expected to grow as the port infrastructure is being expanded through the Liverpool Waters and Liverpool 2 projects. And of course, Liverpool’s pop and rock music scene has cemented its place in England’s music hall of fame. It is the home of The Beatles after all.

With its fantastic transport links, solid infrastructure and a highly skilled workforce, the city is enjoying a surge in demand for industrial and distribution space. It was also voted as one of the best cities in the UK for work-life balance due to its cosmopolitan atmosphere, good employment opportunities, and friendly people.

If you’re interested in basing your business here, we have everything you need to know about occupying industrial space in Liverpool. 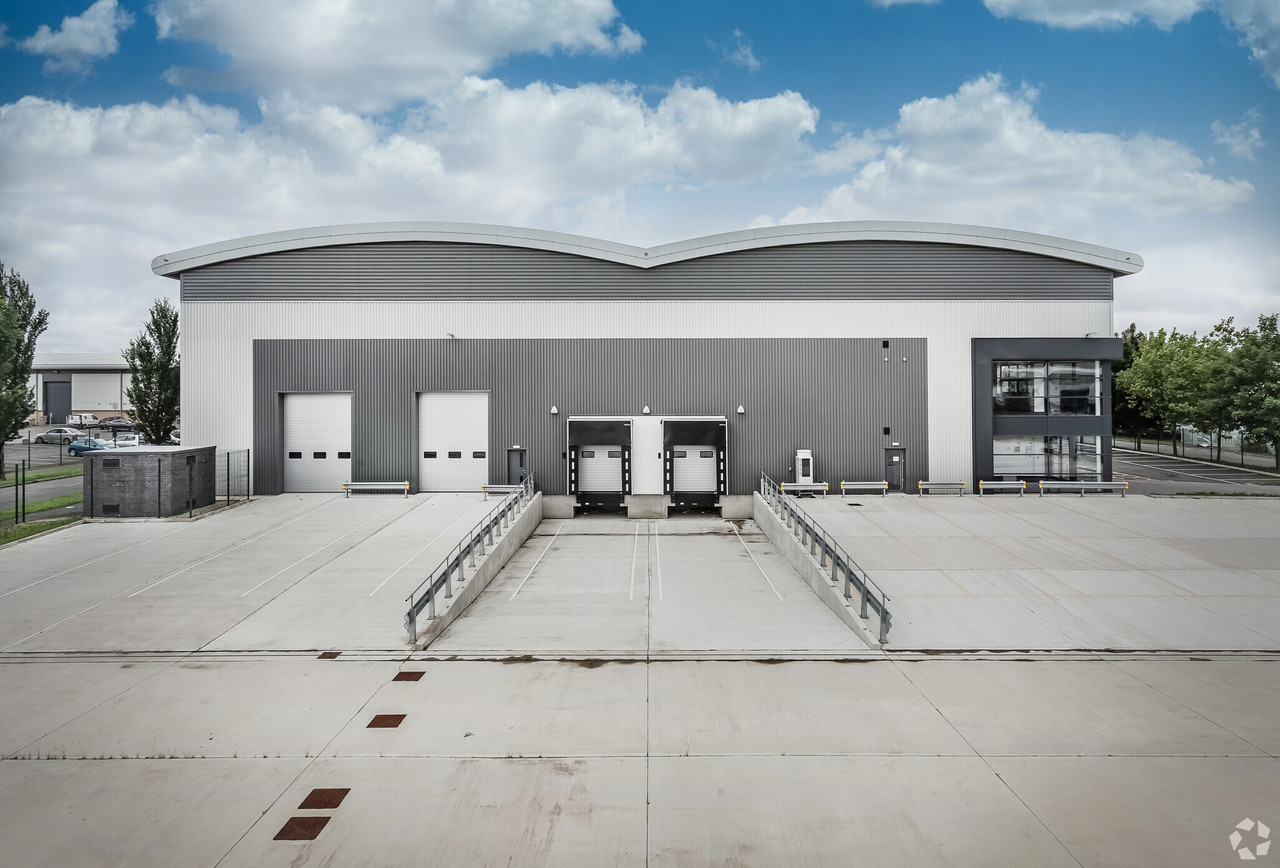 Industrial spaces in and around Liverpool

As Liverpool’s economy continues to diversify, areas historically established as locations for small-scale industrial use are fast disappearing and being converted to new uses. For example, the Baltic Triangle, an area of the city centre that used to be associated with traditional industry, is now a hub of creative and digital businesses. As a result, most of the industrial areas can now be found a little further out in places like Knowsley along the A570 as well as along the A565 towards Seaforth and the A59 towards Aintree.

Given the city’s strong manufacturing base and deep-rooted maritime history, the port remains of economic significance for the industrial sector, providing the quickest and cheapest route to major markets. With deep water berths, world-class facilities and high-tech equipment, the port’s strategic location on both sides of the River Mersey and the Manchester Ship Canal, as well as its proximity to ten motorways located within a ten-mile radius, means that it’s also one of the best-connected ports in the country.

Liverpool is well connected by road

Liverpool has direct road links with many other areas in the UK. To the east, the M62 motorway connects Liverpool with Hull and provides links to several cities, including Manchester, Leeds and Bradford. The M62 also provides a connection to both the M6 and M1 motorways, giving commuters access to more distant areas including Birmingham, London, Nottingham, Preston and Sheffield.

Liverpool has an excellent rail network

Liverpool is served by two separate rail networks. The local rail network is managed and run by Merseyrail and provides links throughout Merseyside and beyond, while the national network, which is managed by Network Rail, serves Liverpool and other major towns and cities across England. The city's main station is Lime Street station. It takes just over two hours to reach London by train, so you can easily travel to meetings in other cities. And if you need to travel further afield or abroad, Liverpool South Parkway provides a convenient connection to the city's airport.

There are lots of useful bus routes in Liverpool

Local bus services for Liverpool are managed by Merseytravel and are run by several different companies, including Arriva and Stagecoach. Queen Square bus station, near Lime Street railway station offers services north and east of the city, whereas Liverpool One bus station has services that go to the south and east.

Liverpool has one of the UK’s largest ports

The Port of Liverpool is one of the UK’s largest ports, providing passenger ferry services across the Irish Sea to Belfast, Dublin and the Isle of Man. Services are provided by several companies, including the Isle of Man Steam Packet Company, P&O Ferries and Stena Line.

Hotels in Liverpool are outstanding

Liverpool has a wide range of excellent accommodation from boutique hotels and 5-star luxury to cosy B&Bs and budget-friendly options. If money is not an issue, Crowne Plaza, Doubletree by Hilton, and Hope Street Hotel are all popular choices for business travellers. On the other hand, if you’re looking for more value for money options without compromising style and comfort then you’ll find a Holiday Inn and an ibis within easy reach too. Want to stay outside the city centre? There are a whole host of convenient places to stay near Liverpool’s industrial areas such as a Travelodge near Stonedale and the Suites Hotel & Spa in Knowsley.

Liverpool has lots of retail space to use

To complement its excellent industrial spaces, Liverpool has an abundance of prime retail space. Located in the heart of the city centre and easy to get to by car or public transport is the Liverpool ONE leisure complex development, which is one of the largest retail developments in the country, with over 150 stores. From high-street to high end, you’re sure to find something here to suit every taste and budget. Also at the heart of the city is St John’s Shopping Centre, the largest covered shopping centre in the city of Liverpool, and home to more than 100 retailers. Venture a little further east and you’ll find Wavertree Retail Park, consisting of 105,000 square feet of leasable space, as well as Liverpool Shopping Park, an out-of-town retail destination located on Edge Lane.

There are plenty of things to do in Liverpool

Liverpool has something to offer everyone. Local nightlife is world renowned, and there is a huge selection of pubs, bars and clubs where you can sit back, relax and enjoy a well-deserved pint or cocktail after a hectic day in the office. As you’d expect from the birthplace of The Beatles, Liverpool also has a booming music scene, and you can listen to live music most nights of the week at various venues around the city, including the world-famous Cavern Club.

The city also has a diverse and fast-expanding food scene where you can enjoy simple street food, fabulous high-end dining, and decadent afternoon teas.

If you’re into sports, you’ve come to the right place with the city boasting two local and world-famous football teams, Liverpool FC and Everton FC. The annual horse racing event, the Grand National, is also held at Aintree Racecourse on the outskirts of the city. If you prefer to work up a sweat instead of sitting on the side lines, there are loads of fitness facilities across Liverpool, from chains like David Lloyd and The Gym to independent gyms such as Hot Fit and Steel Habitat.

The industrial property market in Liverpool is flourishing. Towards the end of 2021, leading master developer, Harworth Group PLC announced that it had acquired an industrial park in Merseyside in an off-market deal worth £26 million. Named Saturn Park, the 35.2-acre site in Knowsley comprises approximately 416,000 square feet of modern warehouse space and is conveniently located near to The Port of Liverpool. In another exciting development last year, Warehouse REIT paid £35 million for four units in Speke Boulevard totalling 390,000 square feet. The biggest letting of the year was in Knowsley, where a leading online retailer took a 15-year lease on a 650,000 square feet warehouse, which is being constructed by PLP, a consortium including Peel, the Australian bank, Macquarie, and Ivanhoé Cambridge of Canada.

Overall, take-up of industrial space in Liverpool city region hit record levels in the first half of 2021, with almost 1.2 million square feet of space being let in the first six months of the year to tenants including:

The future of industrial space in Liverpool

Just a few years ago, industrial property investors would have bypassed Liverpool in favour of Manchester and the M6 corridor in the northwest. However, recent deals show that the desire for industrial space in Liverpool is increasing. There are two key factors driving this increased demand. The first is the growth of e-commerce, accelerated by the closures of brick-and-mortar retailers during the pandemic. Brexit is another factor, causing companies to increase stock levels.

Liverpool not only has a good supply of land, but it also benefits from a large workforce, an established industrial base, fantastic connectivity and heavy investment in infrastructure including the Port of Liverpool.

We expect to see confidence in the region continue to grow, with investors now setting their sights on towns in nearby areas like Widnes and Runcorn, which have old industrial sites poised for redevelopment. This in turn will attract new businesses and create employment opportunities, helping build a stronger local economy.