Offices to rent in Belfast

The Northern Irish capital, Belfast is a vibrant place to base your business. Located on the coast of the Irish Sea and on the banks of the River Lagan, it has been a transport and ship-building hub since the 19th century. After decades of political strife, Belfast has emerged as one of the most exciting cities to be based in the UK, thanks to its excellent array of restaurants, shops and professional facilities.

The city earned the nickname of ‘Linenopolis’, as it was briefly the largest producer of linen in the world. Belfast also played a key role in the production of tobacco processing and rope making. However, the city is best known for its vast shipyards, including the still-standing Harland and Wolff premises where the ill-fated Titanic was built.

Belfast is home to some of the most exciting talent in the UK, as it has two universities: Russell Group Queen’s University Belfast and Ulster University, which has a campus in the Cathedral Quarter of the city centre. As a result, you’ll be spoilt for choice when it comes to recruiting new faces for your growing business.

Want to find out more about living and working in Belfast? Here’s everything you need to know. The city centre is one of Belfast’s busiest areas. From the student-dominated Queen’s Quarter in the south to culture-heavy Cathedral Quarter and the traditionally Gaelic Gaeltacht Quarter, you’ll find professional services, legal, financial services and creative businesses alongside each other in this bustling part of town.

Belfast’s docklands, around the aptly named Sailortown and Hamilton Dock areas, is one of the city’s busiest commercial areas. Lots of businesses across a wide range of sectors can be found here, including media, technology and banking. The Harland and Wolff shipbuilding yard, with its two iconic yellow cranes, Samson and Goliath, dominates the skyline here and shows that Belfast’s rich maritime history is still being written.

Though Belfast isn’t quite the industrial powerhouse it was in the 19th century, it’s still home to a number of important engineering and aerospace businesses. Out in the city’s suburbs, just past Colin Glen Forest Park, you’ll find a number of industrial businesses in and around Springbank Industrial Estate. There are also several important names out towards Bangor in the East, such as Thyssenkrupp Aerospace.

Train stations are dotted across the city, everywhere from the city centre to the suburbs. Great Victoria Street, located just south of the Cathedral Quarter, is Belfast’s main rail interchange, with local and cross-country services stopping here. Lanyon Place, on the banks of the River Lagan, is another major transport hub in the centre of Belfast.

There are lots of bus services in Belfast

If you’re travelling by bus, Belfast has regular, varied services that run to and from the airport, across the central business hubs and that connect commuters with the city’s suburbs. Most, including Belfast’s metro services and cross-border link routes, are operated by Translink.

Need to cross the Irish Sea for business on a regular basis? You can travel by ferry, as Stena Line operates a number of services every day between Liverpool (around 13 journeys per week) and Cairnryan in Scotland (five crossings per day).

You can reach the airport, which is also known as Belfast City Airport, in 15 minutes if you’re travelling by car. Taking public transport? It will take around 35 minutes by bus from central Belfast. Once you’re there, you can fly to a number of destinations across the UK and Europe.

Heading further afield? Belfast International Airport, around 30 minutes’ drive west of the city centre, is your best bet. You can fly as far as Mexico, the US and Iceland from this major transport hub.

Belfast is surrounded by a network of excellent roads

You can travel locally and internationally using the roads surrounding Belfast. The busy M2 connects the Norther Irish capital to neighbouring places like Londonderry. The M1, meanwhile, passes through Lisburn and connects with the A4, which stretches down to the Republic of Ireland’s border at Belcoo.

Offices to let in Belfast 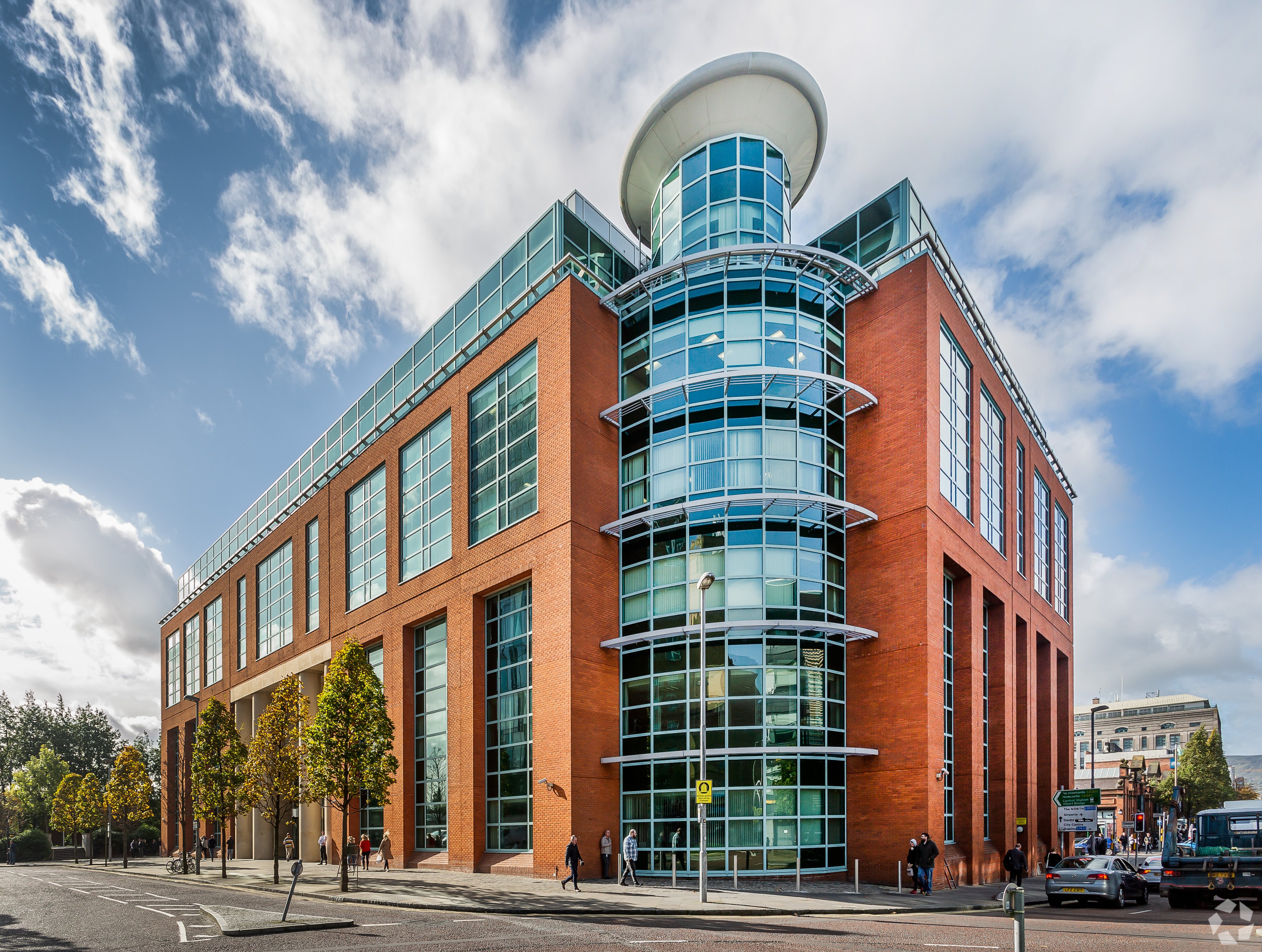 Belfast has a wealth of business amenities

There are hotels for every kind of business traveller in Belfast

From small, affordable places to sprawling, upmarket hotels, Belfast has something for every budget and taste. At the upper end of the scale, you’ll find properties like four-star Malmaison Belfast that overlooks the waters, fuss-free Maldron Hotel and Grand Central Hotel Belfast, the glamorous jewel of the Linen Quarter.

Belfast has plenty of excellent places to eat

There are plenty of tasty treats to try all across Belfast, whether you stop for a taste of South America at Wasacaca Grill, grab a tasty brunch at Grapevine or sample a taste of Asia at Yügo. Looking to impress a client? Visit OX Belfast, a British fine-dining spot on the waterside, or sample delicious food at Michelin-starred The Muddlers Club.

You can also stop at The Merchant Hotel, where you’ll find a number of eateries including 1930s-themed Bert’s Jazz Bar. This art-deco establishment serves up tasty dishes and live jazz music, so it’s the perfect place to wine and dine. 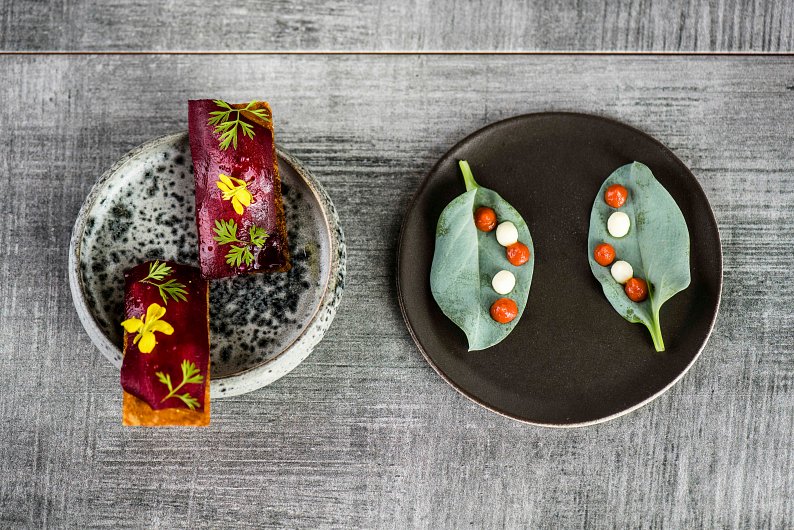 Whether you’re looking for a meeting room with character, like those at the Titanic Belfast, or a small spot perfect for intimate brainstorms, such as LoftSpace or Georgian Merville House, Belfast offers plenty of options. There are also large conference facilities, like the ICC Belfast and Mount Conference Centre, which are found on opposite sides of the river. Looking for somewhere with a truly upmarket atmosphere? The five-star Fitzwilliam Hotel’s meeting spaces fit the bill.Belfast is home to lots of other amenities

It’s easy to keep fit in Belfast, as there are plenty of fitness facilities. Big brands like PureGym, Anytime Fitness and CrossFit have sites across the city. There are also independent sites like HENCH, a strength-focused gym dedicated to building its members’ physical and mental health, and high-end Exsto.

Craving some retail therapy? Victoria Square shopping centre is where you’ll find plenty of options, including the UK’s largest House of Fraser store and more than 70 other high street and designer brands. You could also take a stroll along the Golden Mile, which runs from University Road to Dublin Road, to explore its high-end and budget shops. There are also plenty of places to eat and drink along the way, so you can stop to refresh any time. And if you’ve got the budget, Lisburn Road is where you’ll find some of Belfast’s most exclusive boutiques.