Regal, artistic and historic, Edinburgh has many fascinating sides to it. The Scottish capital is home to the Scottish Government and Parliament and the Royal Bank of Scotland. It also hosts the world’s largest arts festival, Edinburgh Fringe, making it a place where serious work and world-class play are equally celebrated.

Once named the second-best place in the UK to start a business, Edinburgh has plenty to offer its commercial occupants. The city is widely considered the second-largest financial centre in the country after London. And with more than 482,000 residents and one of the world’s top 20 universities (the University of Edinburgh) you’ll have a large pool of talent to choose from too. It’s also conveniently located, with Glasgow just over an hour away by rail or road and London within an hour and a half by air.

During the first half of the 18th century, Edinburgh was overcrowded and densely populated, with people from all social classes often crammed into the same tenement buildings. However, during the latter half of the century, the city was the setting for the Scottish Enlightenment and developed a reputation as an intellectual centre instead.

Since the mid-20th century, Edinburgh has undergone much development, removing slums from the Old Town area and revitalising the former industrial centre Fountainbridge into a modern area for offices and other commercial buildings. Now, it’s an exciting place to live and work, particularly for its office-based residents. Here’s everything you need to know about leasing office space in Edinburgh. 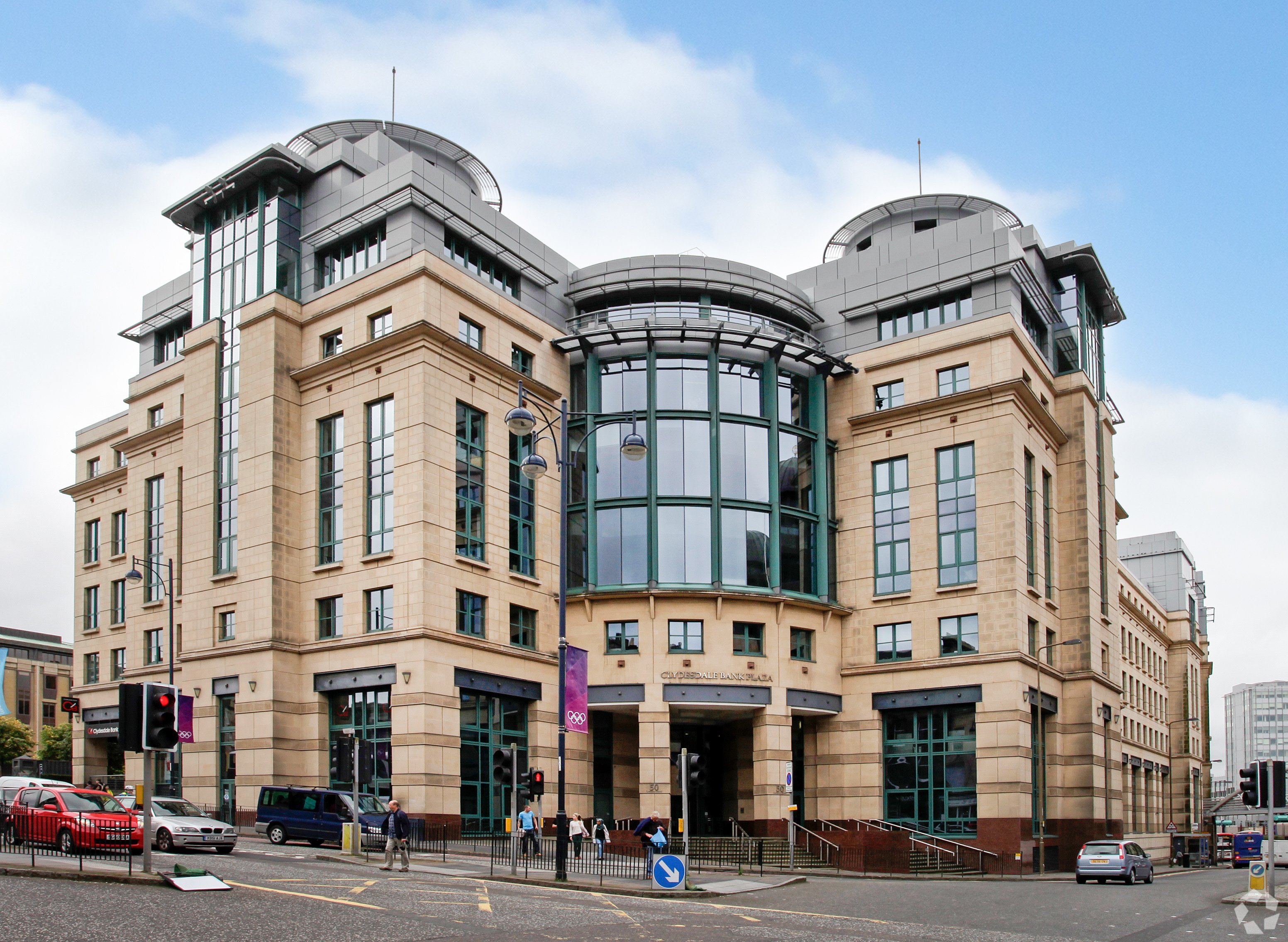 Central Edinburgh is where you’ll find its most notable tenants. The grand Georgian buildings of New Town, many of which date back to the 18th century, and historic structures along George Street have now been converted into striking offices. Despite the fact that this centuries-old area has been listed as a UNESCO World Heritage Site, it’s still a hub of activity.

The West End is also a key area for businesses, thanks to the Edinburgh International Conference Centre and a plethora of important companies operating in financial and professional services. It’s also close to Haymarket train station, making it easy to travel to for clients and staff alike.

If you’re looking for an alternative base, Leith is worth exploring too. Once a thriving port, the multi-cultural area is now better known for its bustling music scene, delicious restaurants and waterfront offices. The lovely scenery and abundance of people from diverse backgrounds make it a great place to base your business. You’ll also be spoilt for choice when it comes to places to host lunch meetings, after-work drinks and brainstorms over brunch.

Stockbridge is another great place to base your business, as its jewellers, galleries and gourmet delis and cafés couldn’t feel further away from the corporate world. There’s plenty of green space for lunchtime walks and endless independent shops to explore in your downtime.

Buses are a popular way to get around in EdinburghMost services are operated by Lothian Buses, particularly in the city centre, but suburban services are also operated by Stagecoach, Scottish Citylink and Bordered Buses. The main bus station is adjacent to the main train station in Old Town, just a short walk from Holyrood Palace.

There are five train stations in EdinburghEdinburgh Waverly is the city’s main station, which can be found in the Old Town, while Haymarket serves the West End and Fountainbridge areas. Away from the city centre, there are three stations, South Gyle, Edinburgh Park and Edinburgh Gateway, which lie between Edinburgh Zoo and the airport.

Edinburgh’s trams run regularly through the cityA 14 kilometre, 16-stop tram line runs between York Place in the New Town and Edinburgh Airport. Ongoing works are happening to extend the line to Newhaven in the north of the city, which are expected to be completed by 2023.

Edinburgh Airport is the busiest in ScotlandIt’s around 30 minutes bus, tram or car journey from the centre of the city, near the suburb of Ingliston. Around 14 million passengers pass through every year, making it the busiest airport in Scotland and a gateway to London and beyond.

Edinburgh has lots of hotels ideal for meetings or stays

Hotels in Edinburgh can be found for every occasion and price range. Welcoming a discerning client or guest? Choose opulence at The Balmoral, which occupies an enviable spot on Princes Street and offers a great view across New and Old Town. Or, go for the upmarket Waldorf Astoria Edinburgh, which is one of the most impressive venues in the city, or get a castle view at the Sheraton Grand Hotel & Spa.

On a tighter budget? You’ll find familiar brands across Edinburgh, including Marriott, Hilton, InterContinental, Holiday Inn and Travelodge in convenient locations across the city. There are also plenty of independent options, including The Links Hotel in leafy Bruntsfield and Fountain Court’s serviced apartments. 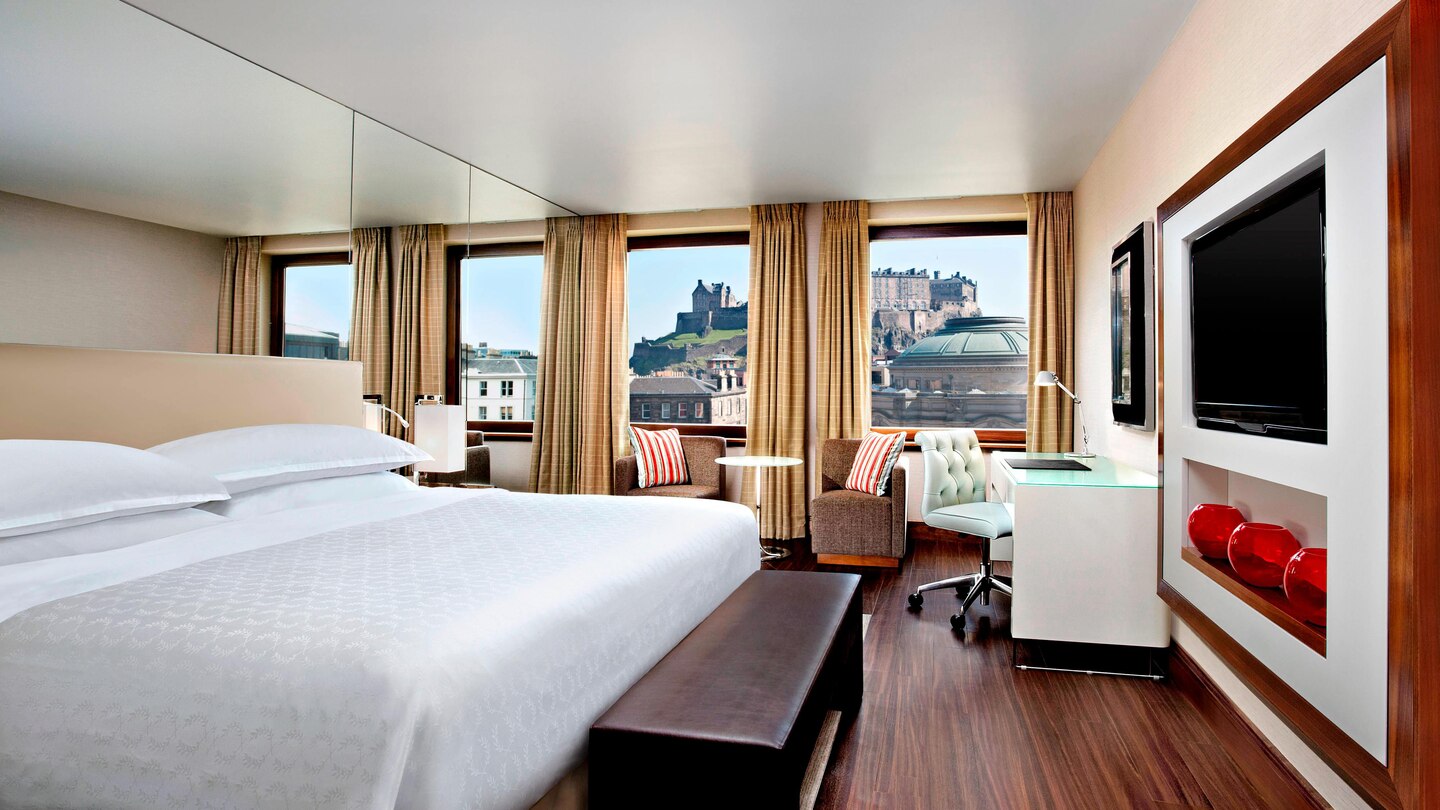 Mealtimes in Edinburgh will leave you spoilt for choice. If you need to take clients for an upmarket lunch or dinner, there are lots of options. Fhior, which uses local produce and foraged ingredients, offers a mystery tasting menu and is certain to impress true foodies. You’ll find hearty Scottish ingredients at Café St Honore, an Edinburgh legend that’s still serving some of the city’s best bistro dishes. And if it’s Italian you’re looking for, Radicibus’ pasta and wine are worth sampling.

But if you’re looking for somewhere more laidback, try out tiny hidden gem Aurora, which offers uniquely tasty dishes. You can also tuck into shared dishes and small plates at 83 Hanover Street, a fusion Scottish-Chilean eatery. And if it’s a catch-up over coffee you want, Word of Mouth Leith offers tasty brunch options and waterside The Haven serves its drinks with great views. Deacon’s House Café is also a quaint spot to talk business.

Meeting spaces can be found right across Edinburgh

No matter how many people you’re welcoming or what sort of vibe you’re going for, there are plenty of meeting and event spaces in Edinburgh. The Meeting Room at Custom Lane, which overlooks the waters in Leith, is a bright and laidback place for up to 20 people to get together. If you’re looking for something a bit grander, Inigo Business Centre’s Georgian façade and meeting rooms have plenty of character. Alternatively, if you’re hosting an intimate event for around a dozen people, The Smoke Stack’s cosy space could be the ideal setting or go big and invite hundreds to the grand McEwan Hall conference centre.

Offices, serviced offices and co-working spaces to rent in Edinburgh

You can soak up culture by wandering through Edinburgh’s many green spaces, like The Meadows in Southside and Dean Village in the West End. When the weather’s less than favourable, retreat inside to cosy bars like The Voodoo Rooms, a renowned cocktail bar and live music space or The Cambridge Bar, which has a roaring fire and craft beers aplenty. If you fancy catching some entertainment, there are theatres dotted across the city, including King’s Theatre which hosts ballet, plays and more and Edinburgh Little Theatre, where you’ll find cutting edge, alternative performances. Or, visit The Cameo Cinema, a century-old cinema in Tollcross.

There are lots of other amenities nearby

If you’re based in the centre of Edinburgh, Princes Street and George Street are the best places to get your retail fix. Brands such as Debenhams, House of Fraser and Primark can be found here. Seasonal markets regularly pop up in Princes Street Gardens, and you can visit the Edinburgh Farmers’ Market every Saturday at nearby Castle Terrace.

Waverly Mall also has plenty of shops and is close to the train station, perfect for a bit of pre-commute retail therapy, while Multrees Walk is the destination for luxe shopping – Harvey Nichols and Louis Vuitton are just two of the upmarket brands here.

There are more than 40 gyms across Edinburgh, catering to every kind of fitness fan. If you’re on a budget, you’ll find affordable chains like Xercise4Less, PureGym and Anytime Fitness, while there are upmarket options like David Lloyd and Nuffield Health too. You can also take your pick from the many independent gyms across the city.

Many of the blockbuster Harry Potter movies were filmed across Edinburgh, and J.K. Rowling was inspired to write the books while living in the city.

75% of Edinburgh’s buildings – more than 4,500 – are listed, meaning they can’t be modified or repaired without proper permissions.

Edinburgh Zoo is home to the world’s only penguin with a knighthood. Sir Nils Olav is a member of the Norweigan upper class and has even earned a promotion to the rank of Brigadier.

Castle Rock, where Edinburgh Castle sits, is actually a 700 million-year-old volcano. Thankfully, it’s extinct, so you can enjoy the sights without fear of an eruption!

Edinburgh once earned itself the nickname Auld Reekie (Scottish for Old Smokey) due to its awful, smoggy air. Now, though, it’s the UK’s cleanest and greenest city, with more than 112 parks. 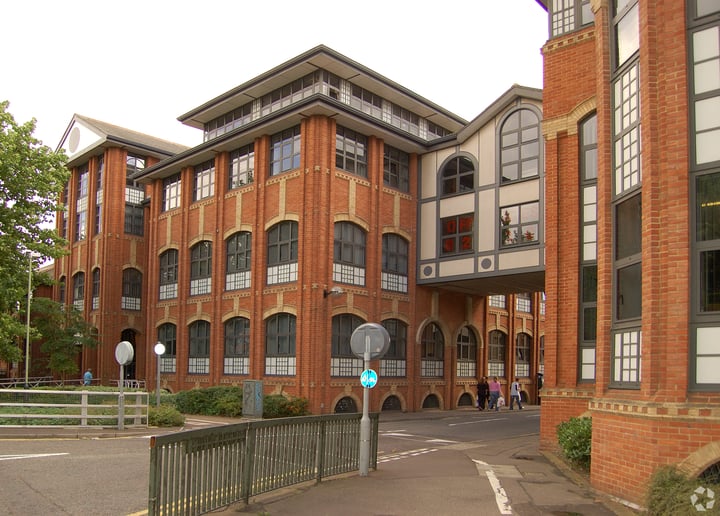 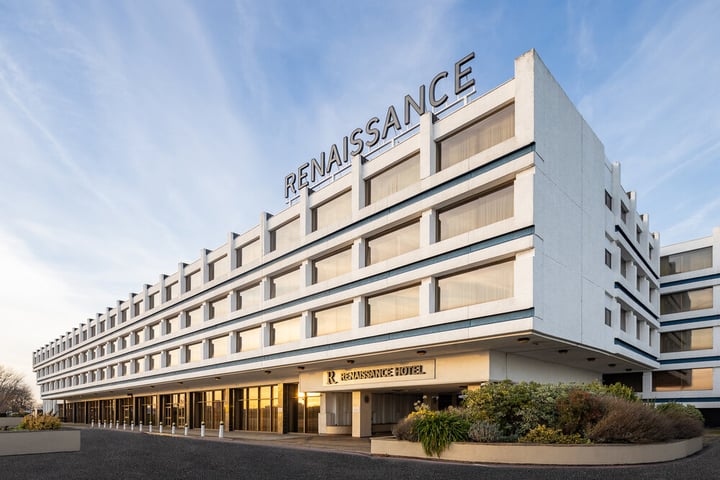