Leeds is the UK’s third-largest city and a hive of activity in northern England. It also has the third-largest urban economy in England and boasts a wealth of companies within the legal, financial services and retail industries. More than 30 national and international banks have chosen Leeds as their northern bases because of this. There’s also an excellent pool of new, highly-trained talent for local businesses to pick from, as there are three universities (the University of Leeds, Leeds Beckett University and Leeds Trinity University) across the city.

Industry dominated in Leeds for centuries, fuelled by innovations like the North Eastern Railway Viaduct that was built in 1869. In fact, more than 50% of the UK’s main manufacturing centres still exist within a two-hour drive of Leeds. Over the years, the city has reinvented itself and now thrives thanks to the exciting retail businesses and commercial tenants that call Leeds home. High end residential and commercial developments have sprung up across the centre of Leeds, which prompted it to be named ‘the UK’s best city hiding in plain sight’.

Leeds is a surprising capital of culture too. Playwright Alan Bennet, novelist Barbara Taylor Bradford, poet Arthur Ransome and J.R.R Tolkien all lived in Leeds. It’s home to plenty of fascinating places, including The Royal Armouries and Leeds Museum (which houses a Mummy that survived the war).

If you want to learn more about renting an office in Leeds, here’s everything you need to know. 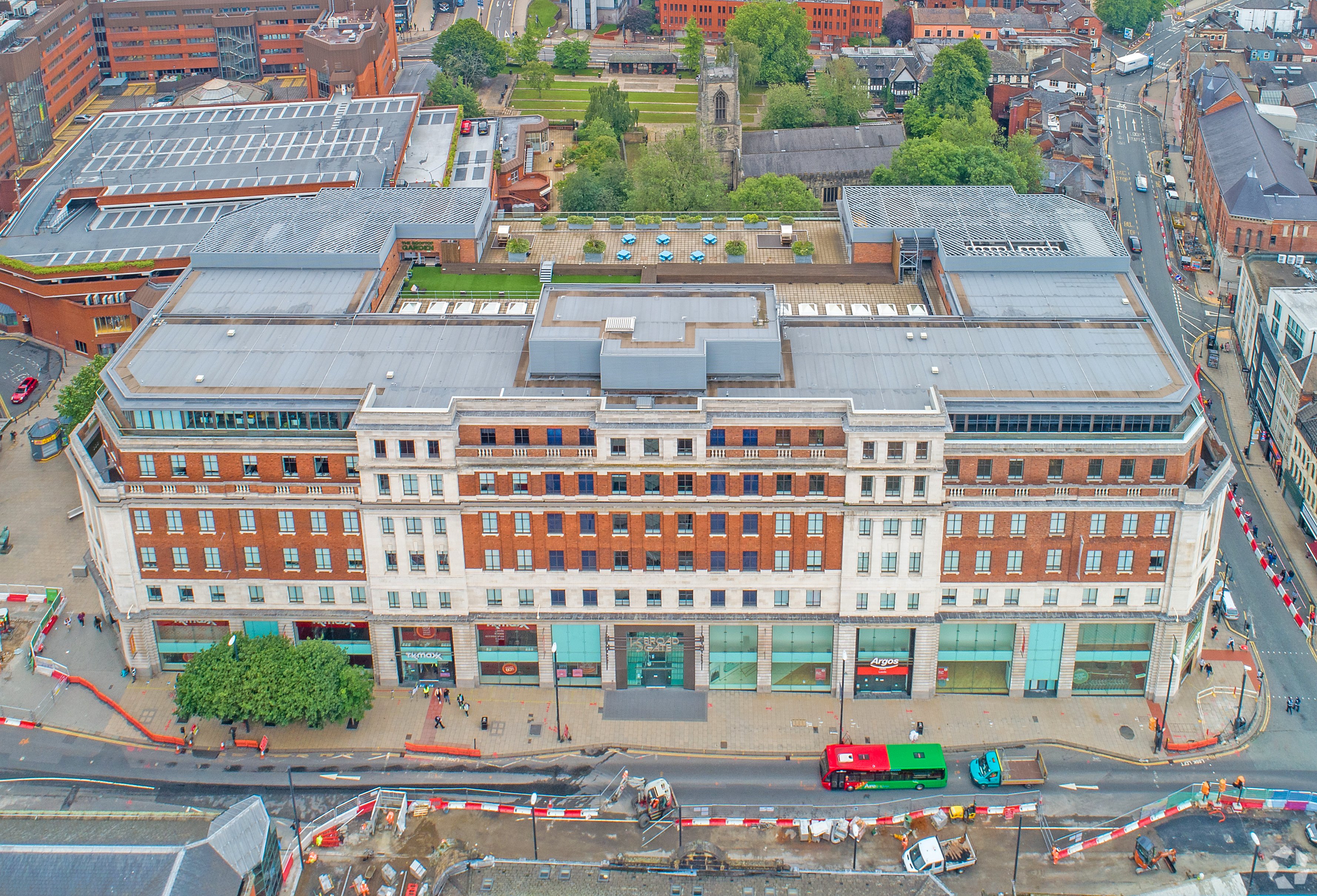 Leeds Central Business District is where you’ll find most of the city’s notable businesses. It’s loosely divided into sections based on the prominent industries of its occupants. The Civic Quarter, for example, is where you’ll find many of Leeds’ law firms as it’s close to the Leeds Magistrates and Crown Courts. Over in the Financial Quarter, centred around The Headrow, many financial services businesses including Leeds Building Society, Bank of England and Zurich, have chosen this area for their regional or head offices. And if you’re looking for the high-end offices, the Skyscraper Quarter in Holbeck Urban Village is the place to explore.

If you’re after an office space that will allow your staff to drive to work, Pudsey is a great option. It’s situated just off the Leeds Ring Road yet will put you close to plenty of green spaces and friendly local pubs. You’re also likely to pay less of a location premium than you would for premises in the bustling Central Business District. The Grangefield Industrial Estate is where most of Pudsey’s office space can be found, so it’s a good idea to start your search in this area.

Another great place for road commuters is Beeston, a suburb two miles south of central Leeds. The M621 and M62 motorways are close by, so you’ll be able to welcome clients and staff to your premises with ease. And when it’s time to take clients out for meetings, there are plenty of restaurants in the near vicinity.

Getting around in Leeds

Leeds has 16 railway stationsThe main station can be found on New Station Street in the centre of the city and services operate nationally and internationally. It has 17 platforms, making it the UK’s largest station outside of London and sees more than 50,000 passengers pass through every day.

There are plenty of bus services in LeedsMost services are operated by either First Leeds or Arriva Yorkshire. The main bus station can be found on Dyer Street, where you can catch services across the city and to other towns and cities across Yorkshire. You can also catch buses from Leeds to nearby Leeds Bradford Airport.

Leeds has an excellent road networkThough its central streets can get very busy, the network of roads in and around Leeds makes it easy to travel across the country. Both the M1 and the M62 can be joined just south of the city, which can take you all the way south via Sheffield, Nottingham, Leicester and Northampton to London. The latter offers an easy route east to Hull.

You can catch flights from Leeds Bradford AirportIt’s around 25 minutes’ drive, or an hour’s bus journey, from the centre of the city. Regular domestic and short-haul flights depart from and arrive here, and you can catch connecting flights to more exotic locations including Dubai, Thailand and America. 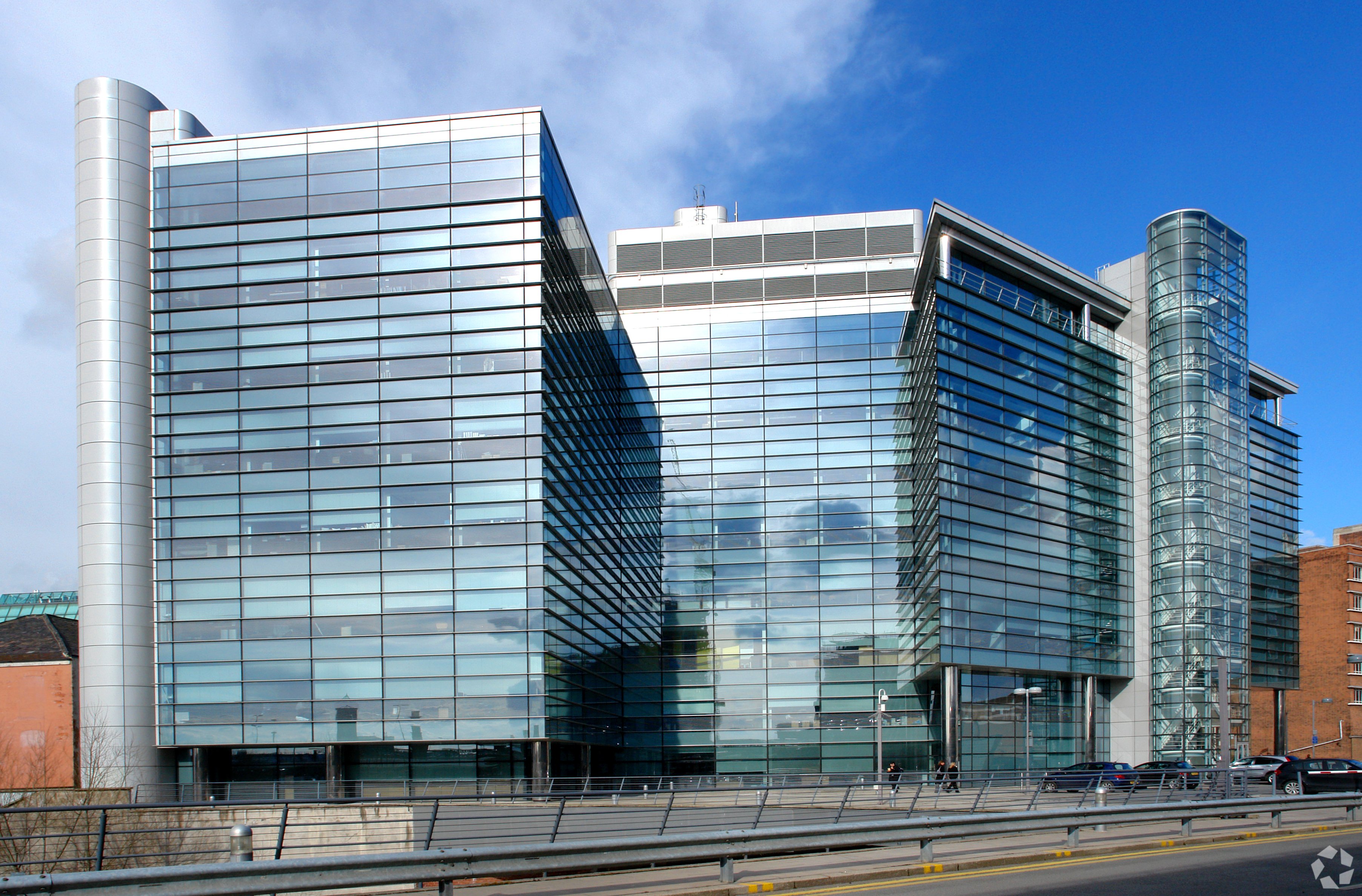 Leeds is home to plenty of business-friendly hotels

Whether you’re trying to impress or keep costs down, you’ll find a hotel to suit your needs in Leeds. If you’re welcoming an important client or want to host an extravagant event, The Queens is a showstopping option. The art-deco arcade is home to expensive brands, so you can even do a spot of shopping while you’re here. Or go for Residence 6, an apartment hotel that’s full of character and within walking distance of the First Direct Arena. And if great transport links are a must, the Malmaison Hotel is just a five-minute walk from the main railway station.

Just looking for a place to rest your head? Leeds has lots of affordable hotels too, including Travelodge, Premier Inn, Novotel and Hilton, where stays can cost as little as £29 (depending on the time of your stay).

Leeds is something of a foodie’s paradise, so you’ll find options for every palate here. If you need to wow a client, Michelin-starred The Man Behind the Curtain’s incredibly unique menu will certainly do that. You’ll also find modern British cuisine at The Swine That Dines - but be sure to book well in advance, as it can get very busy. Crafthouse or Hansa’s are also great choices to impress.

There are plenty of casual eateries too, including La Taberna, Fazenda and Roots and Fruits, which serves beautiful veggie salads and warm dishes. And if you want to chat business over a coffee, you can do so at Out of The Woods, Laynes Espresso or Sociable Folk, among many others. 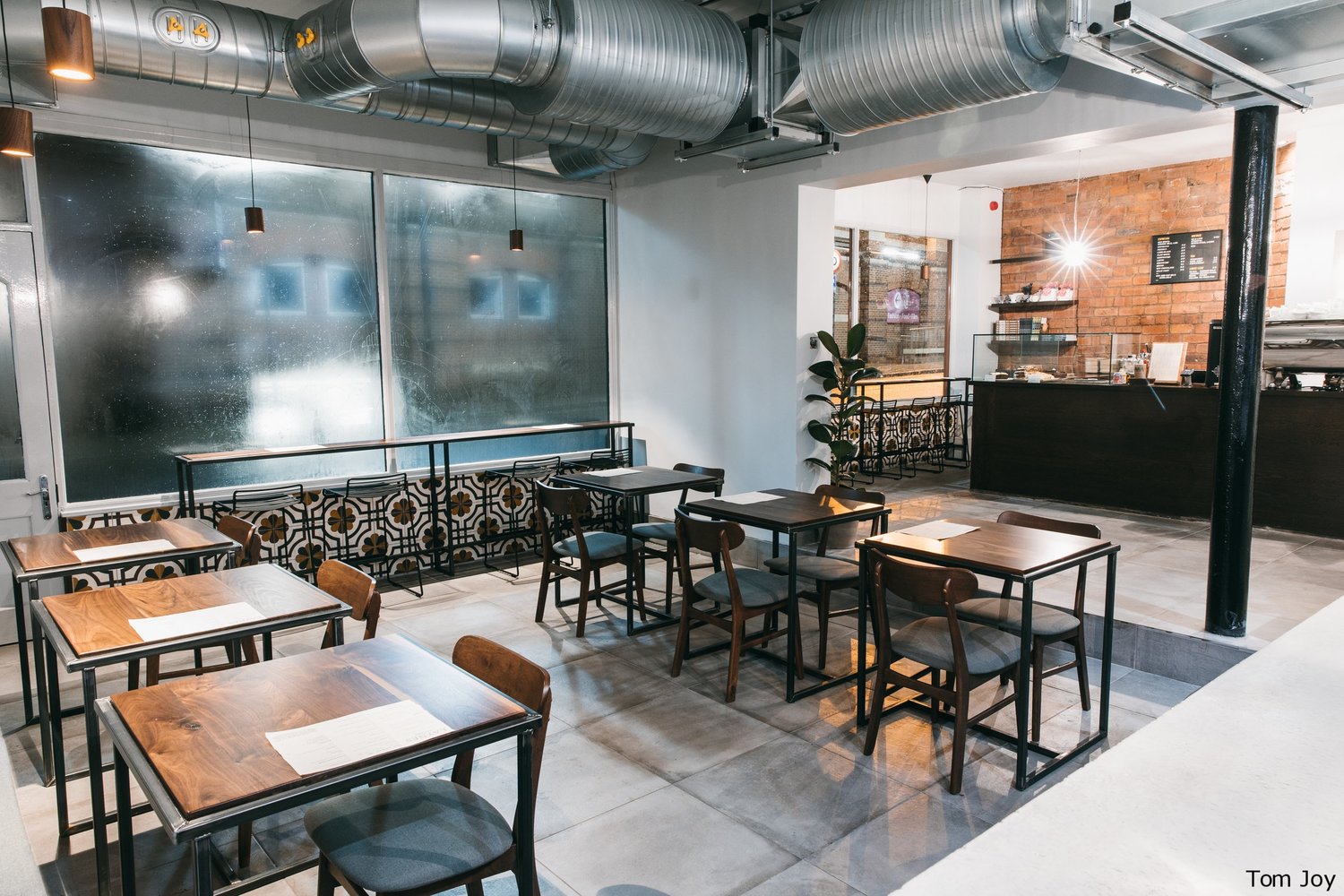 There’s a good choice of meeting rooms in Leeds

From intimate rooms to large venues for hundreds, Leeds has plenty of versatile meeting and event spaces. You’ll find a sleek setting for potentially hundreds of attendees at the studio Leeds or a rustic wooden space for up to 85 at Locked in Games. You could also choose a more modern feel at Horizon Leeds, which has colourful meeting rooms for every occasion.

Leeds also has plenty of other useful amenities

Leeds is known as one of Northern England’s prime shopping destinations, so you’ll find it easy to indulge in some retail therapy here. Trinity Leeds sits in the centre of the city and is home to 120 shops, restaurants and bars. There’s a great mix of high street stores, familiar eateries and international brands just waiting to be explored. You can also visit the historic Grade I listed Kirkgate Market, which has over 400 eclectic food and goods stalls. Or you can browse a host of independent stalls at the iconic Corn Exchange.

If you like to stay active, you’ll find plenty of gyms and fitness facilities in Leeds. Don’t want to spend much to hit the gym? There are plenty of low-cost options, including PureGym, Xercise4Less and The Gym dotted across the city and its outskirts. You’ll also discover gyms that come with all the extra frills, including David Lloyd and Virgin Active, as well as plenty of independent gyms to try out. 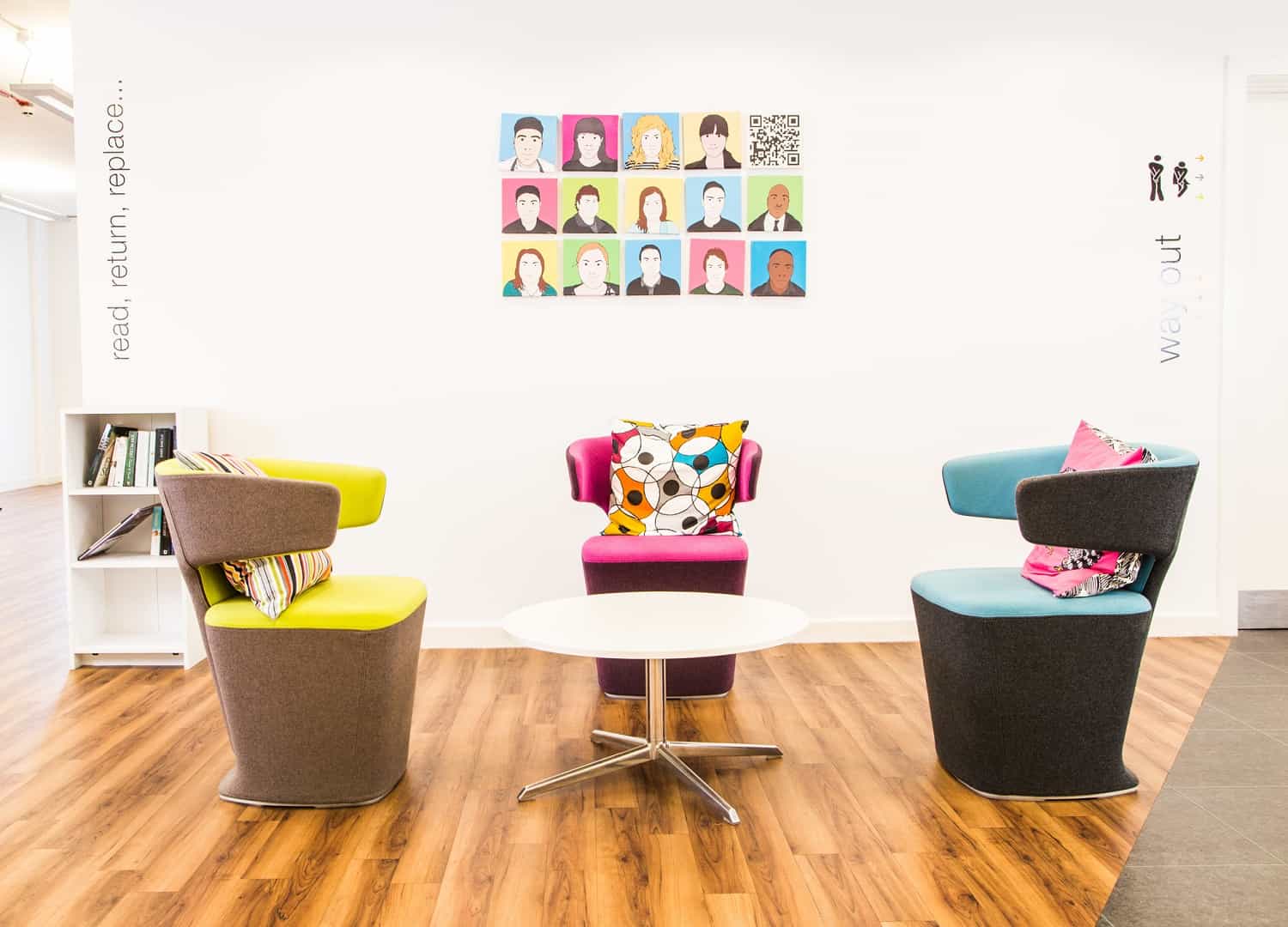 The UK’s first internet service provider, Freeserve, was born in Leeds in 1998. It played a huge role in getting many of us online.

Sir Edmund Happold, the structural engineer behind iconic landmarks such as the Pompidou Centre in Paris and the Sydney Opera House, was born in Leeds in 1930.

Former flax mill Temple Works held the title of the largest single room in the world when it was built in 1836. To keep humidity at the right levels, grass was grown on the roof and it had a herd of sheep grazing on it.

The world’s first hydraulic lift was invented in Leeds in the 1830s (to get the sheep onto the roof of Temple Works, in fact).

Leeds is home to the oldest running commercial railway in the world, which opened a staggering 252 years ago in 1758.