Offices to rent in Leicester

Leicester is a city often overshadowed by its Midlands neighbour Birmingham, but with a population of 500,000, it has a lot going for it. Businesses benefit from great transport links, a growing economy and lively student scene, while residents enjoy a bustling metropolis that’s surprisingly affordable. It’s this combination of benefits that has seen Leicester jump up the popularity tables to find a spot in the top 10 places to live, according to the 2019 Good Growth for Cities Index.

With the largest economy in the East Midlands, at £23 billion GVA, Leicester offers plenty of opportunities for businesses. The majority if its economy comes from SMEs with over 42,000 businesses of this size and stature. For entrepreneurs looking to benefit from networking, Leicester certainly has a lot to offer. It is also attractive for businesses keen to take on new talent. More than 17,000 graduates a year spill out from the University of Leicester, Loughborough University and De Montfort University, giving companies a wide talent pool to select from.

The city itself combines historic charm with modern conveniences and a cosmopolitan atmosphere. You’ll find medieval, Victorian and 21st century architecture across the city, from the surrounding villages to the buzzing centre. Leicester is also known for its connections to Indian culture. It’s home to the Golden Mile, which resembles an Indian bazaar lined with beautiful jewellery shops and places to eat authentic Indian food.

Having enjoyed rapid growth in recent years, in terms of skills, new businesses and wages, Leicester has experienced a surge in house prices. For many, the rising property prices is making the city a less attractive place to live and work, but for others, they signal an opportunity for investment.

Although 98% of Leicester’s business have fewer than 50 employees, the city is home to big names including Walkers, IBM, Santander and Dunelm. Unlike many other cities, which see their most prominent businesses clustered around the centre, giant brands in Leicester are dotted across the city. For instance, you’ll find Walkers to the north just outside the ring road, Santander to the south near the M1, and Dunelm to the north just beyond Thurmaston.

For those businesses looking to attract high levels of footfall, the Lanes or city centre provide exactly that. Independent businesses will be welcomed into the Lanes – a myriad of cobbled streets lined with luxury clothing stores, and jewellery stores sandwiched between charming coffee shops and an abundance of restaurants and pubs.

Leicester city centre is popular with high street retail businesses and those based in offices. You’ll find large buildings boasting office space, along with converted period properties, such as those on The Crescent. It is understandable why many businesses opt to be in the heart of Leicester. As a relatively small city, it is easy to visit neighbouring clients, amenities and social venues on foot.

Leicester is one of the most well-connected cities. Situated in the East Midlands, it is fairly easy to travel to cities in all four corners of the country.

The M1 runs to the west of the city and is connected to Leicester’s ring road in two key points, as well as to the A50 to the north. By joining the M1 and heading north, you can reach Loughborough in 25 minutes and Nottingham in 45 minutes, while Northampton to the south is under an hour away. You can also take the M69 heading west out of the city to join the M6 just outside Coventry. Continue along the M6 and you’ll reach Birmingham, taking just 50 minutes in total, traffic dependent. Thanks to these connections, over 90% of the UK population is within a four-hour drive of Leicester.

Quick connections to London from Leicester

If you have clients to visit in London, basing your business in Leicester could be a wise move. Trains to St Pancras take just over one hour and 15 minutes. Or if business is taking you to Birmingham, you can get there in under an hour using CrossCountry rail. Journey times are even quicker if you’re heading up to Nottingham, which takes just 30 minutes by train.

You can reach two international airports within an hour from Leicester

The city’s centrality and excellent road network puts three international airports within easy reach. Birmingham Airport is an obvious choice. It is the third largest UK airport outside London, home to 50 airlines, and is just a 45-minute drive away. East Midlands Airport is even closer, taking just 30 minutes to reach by car, but airlines only fly from here to select European destinations.

With more of us looking to ditch the car in favour of public transport, it is useful to know that the bus network in Leicester is well connected. A number of bus operators run services across the city, including First Bus, Stagecoach, Arriva, Centrebus and Skylink, which offers quick links to East Midlands Airport. There is also a Park and Ride service, with buses arriving every 15 minutes at the station in Birstall, to the north of the city centre.

Offices to let in Leicester 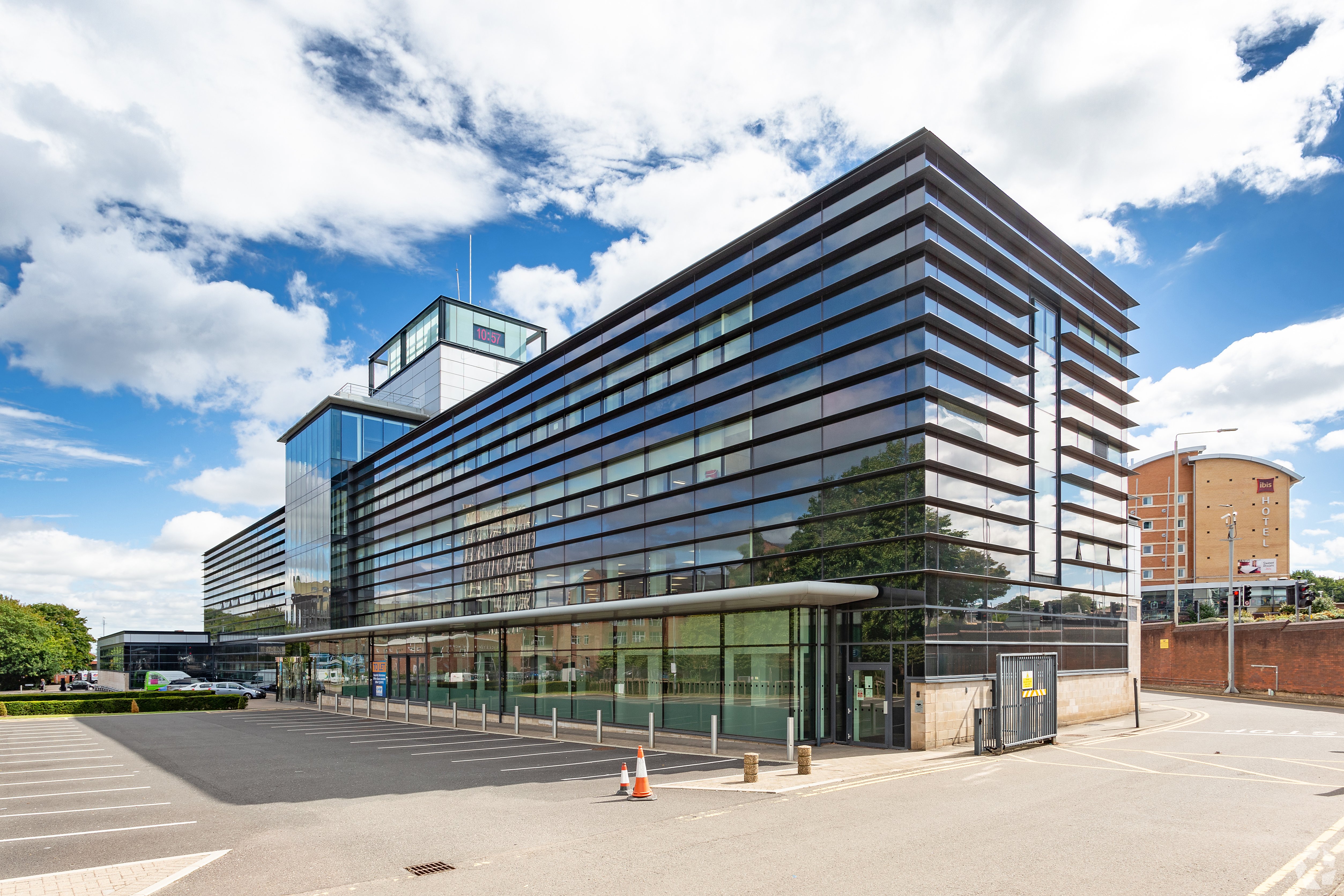 Leicester has a raft of affordable hotels

When clients are visiting you, there will be plenty of places to stay to suit any budget. Large chains like Holiday Inn, Mercure and Premier Inn all have hotels in the city centre. Rooms in these hotels start at around the £40 to £50 mark.

If your clients are waiting to be impressed, then you’ll find a number of smaller boutique hotels offering that special touch. Winstanely House, just outside the city centre, is an upmarket stay set in attractive gardens. St Martins Lodge is closer to the centre but also welcomes guests with plenty of style in its Georgian building.

To give your clients all the modern conveniences they could need, the Novotel has a gym, cocktail bar and restaurant. The Marriott has a gym too, along with a swimming pool, steam room and sauna, and is situated by the M1.

Leicester has an excellent range of dining options

As a multi-cultural city, Leicester has a great range of places to eat and drink. Head to Herb for a taste of Kerala’s vast and punchy flavours, but be prepared for a menu of plant-based dishes. Head to Chutney Ivy for a Michelin-starred chef’s take on pan-Indian cuisine. Or keep your taste buds in Europe and head to Oggi for rustic Italian dishes.

If you want to really impress a client, there are a number of highly celebrated restaurants in Leicester. Book a table at The White Peacock for exquisite dishes and beautiful décor to match. Another favourite in the city is The Case, a luxurious wine bar and restaurant where you’ll dine at tables covered in white cloths and be served modern British food alongside a glass of champagne.

For quick lunchtime bites that keep you and your team satisfied all afternoon, make your way to Grays pop-up shop for generous burgers and filling breakfast sandwiches, or to The Pantry if you’re following a plant-based diet. And when it’s Christmas party time, get a booking in at Brick and Beam for a lively atmosphere and a quick team photo on the much-loved rooftop terrace. 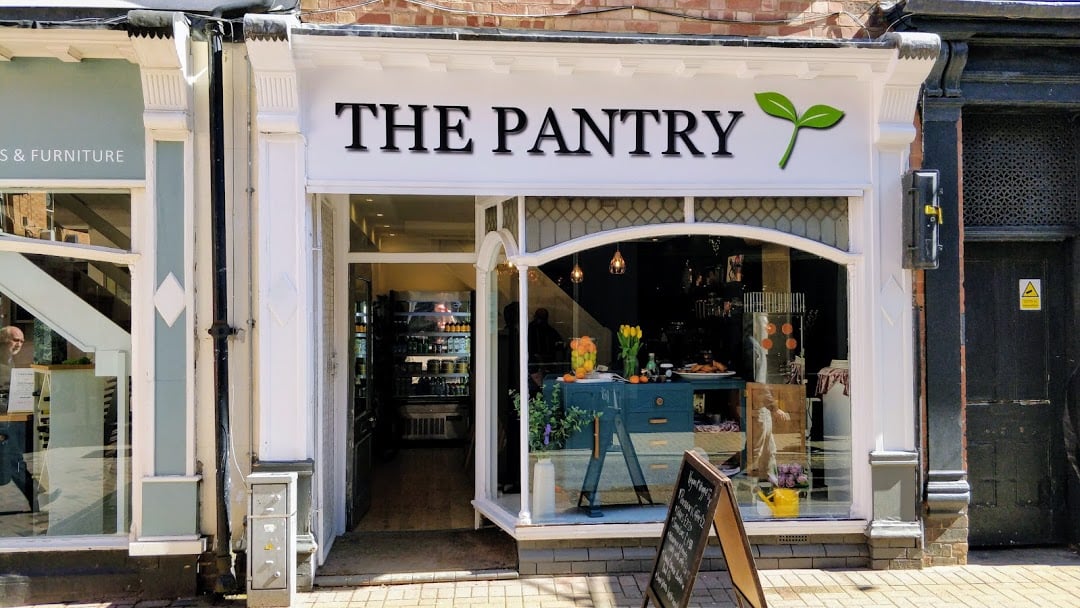 Choose from a number of great conference centres in Leicester

Whether you’re setting up a client workshop or a large conference for 400 delegates, you’ll find the space you need in Leicester. For the larger and more upmarket end, the Mercure offers a grand setting with excellent refreshments to keep everyone happy throughout the day.

To run client workshops or team training days, book a space at Big Shed, a modern space close to the M1 with large open rooms that can be adapted to different styles of meetings. Or stay in the city centre at St Martins House, a converted grammar school providing various peaceful spaces for small boardroom style meetings, workshops for up to 45 people and evenings for up to 180 guests.

You could also venture away from the traditional meeting rooms and book a space at the National Space Centre. Here, you’ll find particularly special spaces to hire, including the planetarium and meeting rooms inspired by the US Space Shuttle Program.

Other amenities in Leicester

When you need to grab essentials or organise birthday presents, Leicester city centre will cover all bases. There are two main shopping centres. Highcross Leicester has over 100 stores, including John Lewis and Debenhams, over 40 places to eat and drink and a Cinema De Lux. Another key retail destination is the Haymarket Shopping Centre, home to over 60 businesses.

There are a number of gyms dotted across the centre to keep your team and visiting clients active. PureGym and The Gym provide a more budget-friendly place to stay in shape, while Bannatyne Health Club and Spa suits those willing to splash out for pool and spa facilities. For those looking to sweat it out without the gym, you can try Hotpod Yoga or Gannon's Martial Arts.