Looking to build your business in West London? Ealing and Shepherd’s Bush are two options worth exploring, offering quick commutes into the City and exciting development.

Browse offices to rent in Ealing

Nicknamed the ‘Queen of the Suburbs’ in 1902, Ealing hasn’t lost its blend of country and city living that’s long made it a popular town in West London. Its tree-lined streets and large Victorian homes are what first shot it to fame, as well-to-do Londoners ventured out to escape the smoke and smell of the capital. Over the years, however, Ealing has expanded to become a significant commercial and retail centre, with a thriving night-time economy.

There’s lots attracting global companies and brands to Ealing. The town is close to London and Heathrow, boasts competitively priced office space, and has a strong local labour market. On average, 55% of the people living in the town hold degree-level qualifications. That’s in part thanks to the University of West London, which has a campus in Ealing. Known as a ‘career university’, it was recently rated the top university in London for overall student satisfaction. According to the Higher Education Statistics Agency, 98% of its graduates find employment within six months of graduating. 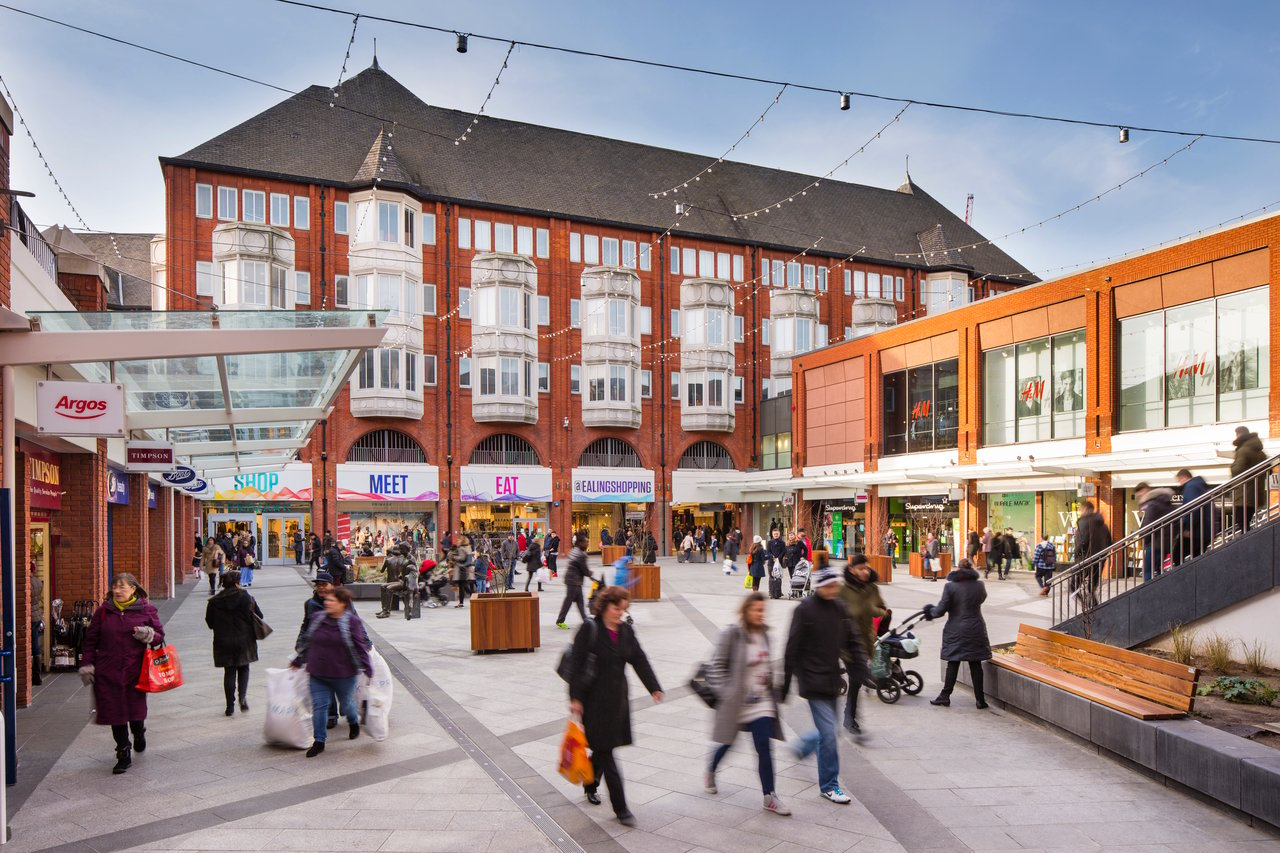 Plenty of big-name brands are on the doorstep of Ealing, including Disney, Sky, Coca-Cola and British Airways. Also nearby is the Park Royal industrial estate, which is the site of the largest business park in London. Although it was a centre of engineering for many years, today there are over 1,700 businesses here, employing some 40,000 workers. Sectors include logistics, film and prop houses, car repair and vehicle maintenance. Food manufacturing is also prominent. There are some 500 food companies within the estate employing over 14,000 people, including McVitie’s and Heinz. In fact, Park Royal is thought to produce a third of all food consumed in London.

Getting around in Ealing

Ealing is known as a commuter’s dream, thanks to its location and connections. The upcoming Elizabeth line is set to boost commuting even further, providing fast and direct access to the West End, City of London, and Canary Wharf.

Ealing Broadway station is the main train station in the area, served by both the Great Western Railway and TfL Rail, as well as the London Underground in zone 3. The station is on the Central and District tube lines, offering a 10-minute ride to Paddington or a 26-minute trip to Heathrow Terminal 4. There are also various other tube stations in the area, including at North Ealing, South Ealing, Northfields, Park Royal, Hanger Lane and Ealing Common.

A bus and taxi network in Ealing

There is a total of 18 buses serving Ealing Broadway station, including night buses. You’ll also find a taxi rank at Haven Green, right opposite the station. If you choose to drive yourself, there are 16 car parks in the borough of Ealing.

Heathrow Airport is on your doorstep

Hop on the A4, M4, A4020 – or take the tube – and you’ll reach London Heathrow in under 30 minutes. The new Elizabeth line also promises up to six trains an hour heading to the airport, making doing international business easy.

Offices to rent in Ealing on Realla 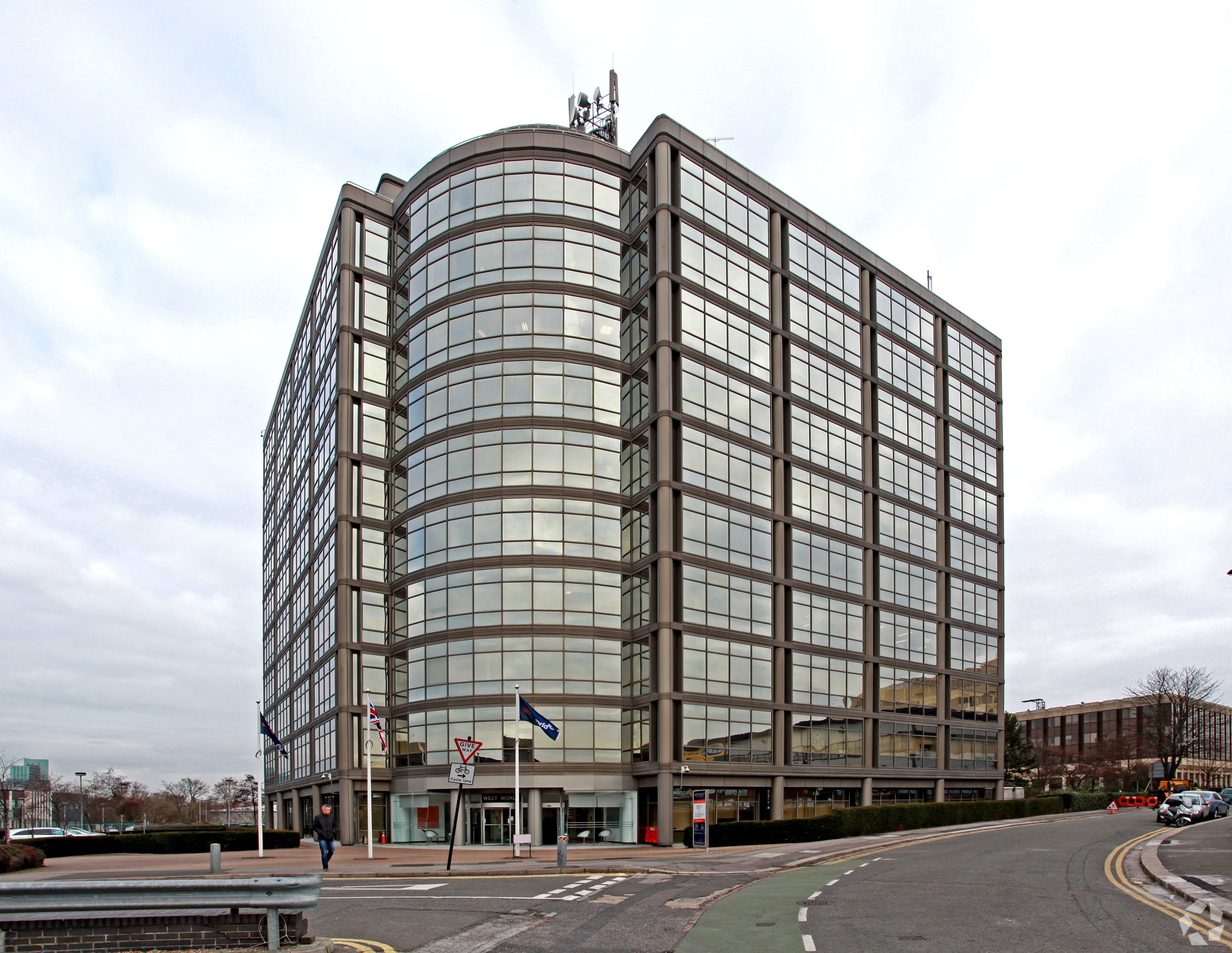 When it comes to hosting clients or international colleagues, there are lots of hotels ready to welcome them. Choose from the affordable Premier Inns, Travelodges or Holiday Inns. For a more upmarket, but still affordable, stay try the ibis Styles London Ealing Hotel or Park Plaza within Park Royal, which also offers functional meeting rooms. The Kings Head Hotel provides style and sophistication, but if you’re after something more traditional, there’s The Drayton Court Hotel or The Fox and Goose Hotel, which both include a typical English pub.

Restaurants in Ealing score consistently high in reviews, leaving you spoilt for choice. Treat clients to a classy night out at Galicja Restaurant, famous for its European flavours. Or enjoy a staff lunch and thick-cut steak at Steak on the Green voted Ealing’s best restaurant in 2020. Locals also recommend No 17 Dickens Yard for everything from morning coffee to post-work drinks, and La Rueda De Tapas for authentic Spanish tapas.

Meeting rooms for any function and budget in Ealing

If you need to rent out a meeting room for the day, Ealing has a range of options available from the small and intimate to the grand. The Down Under Training Centre offers a more informal setting for up to 50 people, while the Pitzhanger Gallery can host up to 250 guests, ideal for corporate parties.

Spaces also offers functional, contemporary and professional office and co-working spaces ideal for small businesses and start-ups, as does Storey. Where to spend your free time in Ealing

Walpole Park is one of the most picturesque, offering 28 acres of parkland. In summer, Walpole Park plays host to a wide variety of festivals, including beer, jazz, comedy and opera.

Notable office tenants in and around Ealing

Also in West London, just under five miles from Ealing is Shepherd’s Bush. While it’s predominantly a residential area, dotted with small shops and a popular street market that’s been running since 1914, there’s lots of exciting business activity happening in and around the area.

Shepherd’s Bush is in very close proximity to Television Centre, a building complex that served as the headquarters of BBC Television for some 53 years. Lots of well-known productions are filmed here, including The Graham Norton Show and QI, as well as ITV productions including Good Morning Britain and Ant and Dec’s Saturday Night Takeaway. 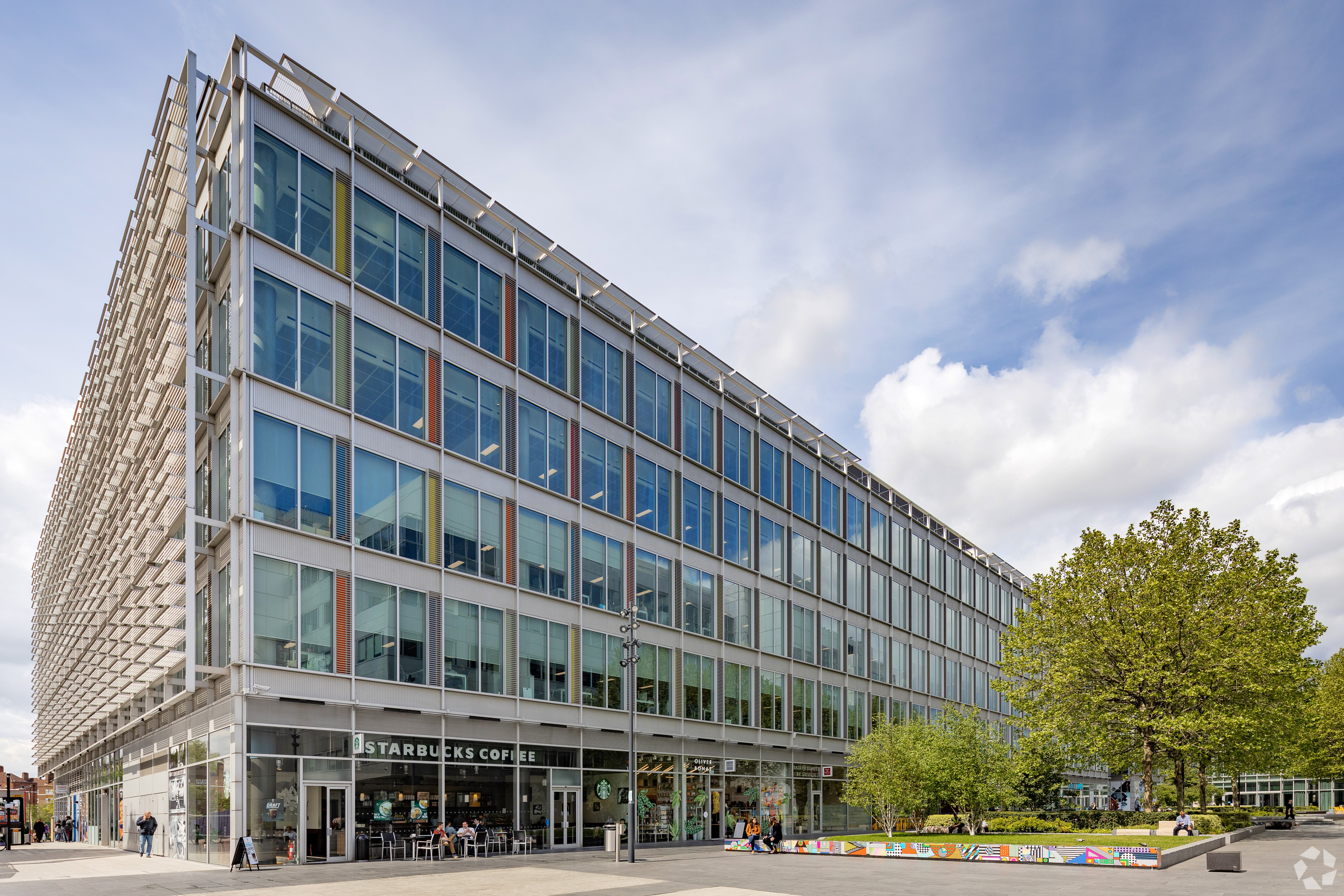 Television Centre is part of White City Place on Wood Lane – the business hub on the doorstep of Shepherd’s Bush. White City Place is known as West London’s creative campus of culture and commerce, filled with businesses in fashion, technology and broadcasting. L’Oréal, Novartis, Net-a-Porter, Ralph & Russo, Li & Fung and Jellycat all have offices here.

Across the way is the Imperial College London White City campus. A £2 billion investment, it aims to bring together scientific researchers, corporate partners, entrepreneurs and the local community to champion world-class research and development. Two key efforts in this mission include the Invention Rooms, a space where anyone can learn digital skills and turn their ideas into working prototypes, and the School of Public Health. Set to open in 2022, the school will use data and technology to improve understanding of disease and provide low-cost health solutions. Finally, there’s also the innovation hub, which has provided office and lab space and support for early-stage deep science companies since 2016.

Getting around Shepherd's Bush

There are also overground trains operated by London Overground and Southern, providing direct services to Kensington, Clapham Junction and Croydon. Other destinations include Wembley, Milton Keynes and Watford.

There are lots of London Buses routes that serve both Shepherd’s Bush Green and White City.

If you prefer to travel by car, the A3220 borders the district for an easy link to the A40 into Paddington. And for those who fancy two wheels, there are a number of cycle lanes offering traffic-free access from Holland Park Avenue to Shepherd’s Bush Green.

Offices to rent in Shepherd’s Bush on Realla There's a handful of good hotels in Shepherd's Bush

There aren’t an abundance of hotels in Shepherd’s Bush itself, though there’s sufficient variety and plenty within the borough. To stay in town, the Dorsett hotel scores high reviews for offering a sense of heritage with contemporary elegance, as well as private lounges and a gym. If that’s not within your budget, try the Hotel Shepherd’s Bush London, which has modern rooms and a meeting room for up to 20 people, or the ibis London Shepherds Bush – Hammersmith Hotel.

Want to truly pamper a client? Book them in to the K West Hotel & Spa – a striking glass cube hotel featuring an indulgent spa and studio bar.

Shepherd’s Bush is a diverse town – and its restaurants reflect it. Ayam Zaman serves up beautiful Syrian and Lebanese dishes, while the Banaadiri Restaurant offers East African flavours. For filling and healthy meals, The Grill Master is a popular favourite. Boconni has Instagram-worthy Italian cuisine on the menu, while Shikumen offers modern dim sum dishes and creative cocktails. 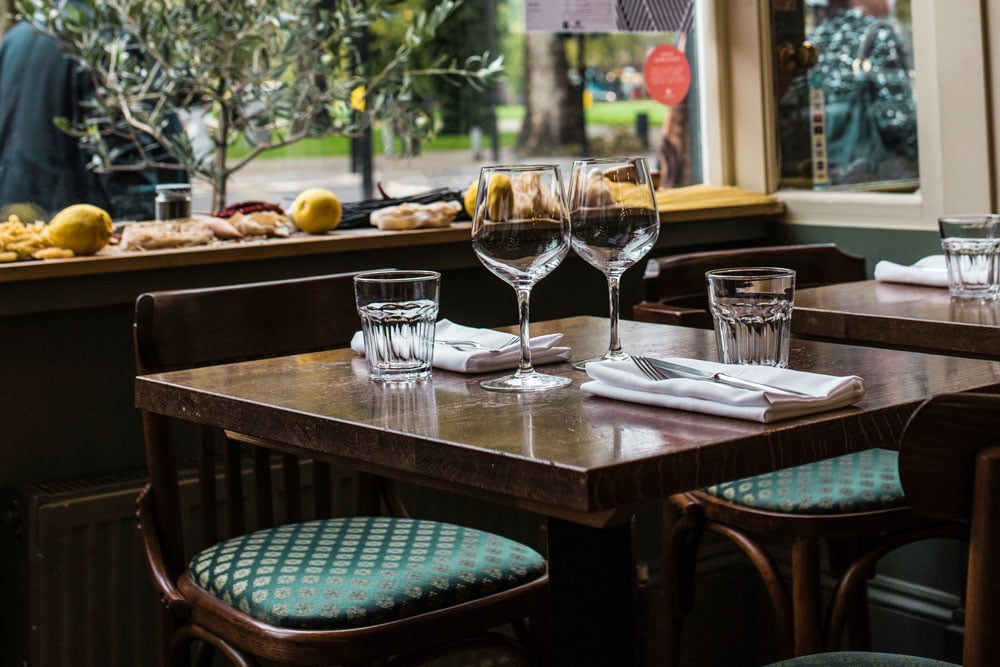 You’ll find more meeting rooms available as you head towards Hammersmith and White City, though Shepherd’s Bush has a range available. The Attic offers a neutral space that can be transformed to meet any requirement, while The Green Room offers an attractive and functional space for a meeting or forum.

What Shepherd's Bush has to offer

From its market to its malls, Shepherd’s Bush is developing a name for itself on the shopping scene. The nearby Westfield London is a large shopping centre in White City, which was developed at a cost of £1.6 billion. Inside is everything from grocery stores to luxury, fashion, technology, beauty, sport, and toy retailers. There’s also a bowling alley, mini-golf course, sports pub and cinema.

But if it’s just a bit of green space you’re in need of, Shepherd’s Bush Green offers eight hectares of open land lined with trees, which was newly regenerated in 2012.

Notable tenants in and around Shepherd's Bush