Offices to rent in Hackney and in Stratford

East London is an exciting place to base your business. From the cool bars of Shoreditch and Dalston, to upmarket Canary Wharf, there’s something to suit everyone in East London. Whether you feel like exploring Whitechapel Market, visiting a gallery in Hoxton or fancy a stroll along the river, there’s also plenty to keep you occupied outside working hours too.

Green spaces and scenic waterways sit alongside huge skyscrapers like One Canada Square, making East London an area of stark contrasts. But that’s part of its charm – you can hop from a chic rooftop bar to a quaint market and onto a National Trust property like Sutton House, with ease.

Historically, London’s East End was located outside the city walls of London. Over time, small hamlets and villages began to spring up around the Roman road that led from Colchester to Essex. And as the Docklands began to develop, many were drawn to the area as new industrial opportunities arose. Even after their decline in the mid-to-late-20th century, East London had developed its own identity as the edgier side of the capital.

Want to find out more about renting a serviced office or flexible co-working space in East London? Here’s everything you need to know. 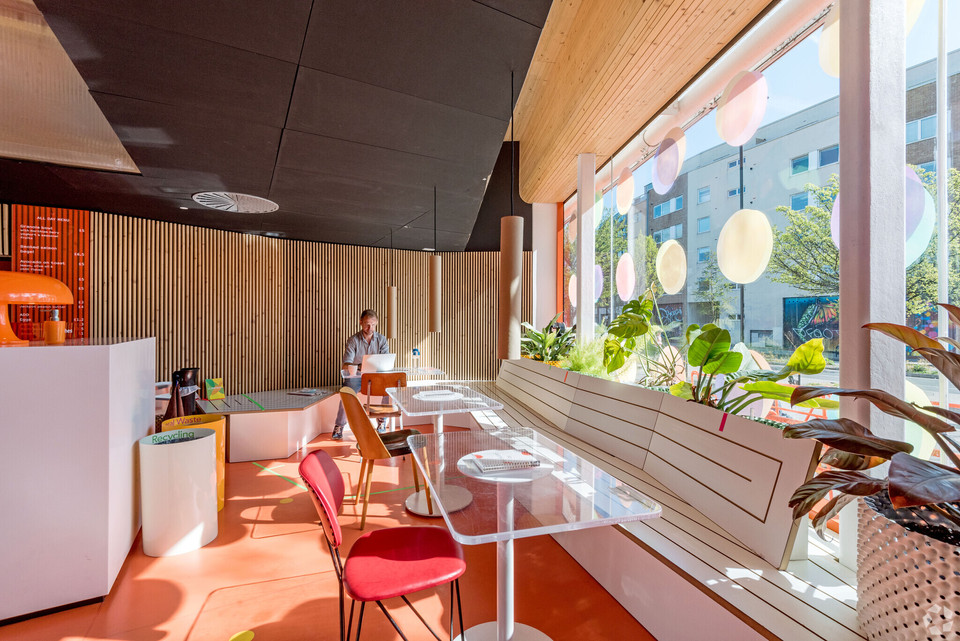 East London Tech City, also known as Silicon Roundabout, can be found between St. Luke’s and Hackney Road. It’s home to some of the country’s most innovative tech start-ups, as well as multinational giants like Google, Amazon, Microsoft and Facebook.

If you’re in retail, leisure or food and drink, Shoreditch is a major cultural hub. You’ll find cool bars alongside modern eateries, meaning you’ll be spoilt for choice when it comes to after-work activities too. Shoreditch is also a popular tourist spot, thanks to major clubs like XOYO and the beautiful Columbia Road Flower Market.

Canary Wharf is synonymous with the financial world and the professional services sector, and for good reason. It’s home to some of the biggest companies in the world, including JP Morgan, Citibank, Knight Frank, KPMG, Barclays and more. When it’s time to entertain important clients, there are plenty of prestigious eateries around too, so it’s an excellent place for those with an upmarket clientele.

Getting around East London

Transport for London (TfL) is the main operator of buses in the area and the East London subsidiary of Stagecoach, which is TfL’s chosen contractor, currently runs more than 45 services here. Whether you’re looking to get around Stratford, Canning Town or the Docklands, you’ll be able to do so with ease using a classic red London bus.

There are around 11 Underground stations in East London

You can travel all across London via tube, whether you’re popping into central London for a meeting, jetting off from Heathrow, or catching a show in the West End. They’re also conveniently located by key business and entertainment hubs, such as Canary Wharf and Shoreditch.

You’ll find a number of stations across East London, particularly around the Hackney and Stratford areas, making this another convenient way to navigate the city.

This system starts at Bank in the centre of London and runs through the east of the city, branching up to Stratford, across to Beckton and down via Canary Wharf and the river to Lewisham. If you’re looking for a quick and easy way to navigate the area, this is an excellent option.

A number of major roads across East London, including the A13, which leads out towards Greys in Essex, and the A12, which runs north-east towards Brentwood. If you need to nip across the Thames, you can use Rotherithe or Blackwall tunnels to reach South London.

There are four airports within easy reach of East London

The closest airport to East London is London City Airport, which is located in the Docklands area. It’s a convenient choice for domestic and short-haul flights and can be easily reached via the DLR or road. If you’re heading further afield, Stanstead Airport is a great option that’s just 40 minutes drive away, while Gatwick and Heathrow are both just over an hour away.

Offices to rent in Shoreditch

There are plenty of business-focused hotels in East London

You’ll be spoilt for choice if you’re looking for somewhere to stay in East London. Opt for the quirky, modern New Road Hotel, classy The Hoxton or even the floating Sunborn London if you fancy a real change of scenery. There are plenty of budget options too, like ibis London Canning Town, Holiday Inn Express London-Limehouse or Point A Hotel London Shoreditch.

Looking for a little luxury? Properties like the Montcalm East in Shoreditch or Crowne Plaza London Docklands are fit for the most important guests.

Whether you’re in the mood for Andean and Latin American at Shoreditch’s Andina, fresh vegan treats at Love Shack or want to tuck into a good old burger at Burger & Beyond, there are so many places to eat here. You can also try Basque-country bites at Sagardi or grab a Mediterranean feast at JOAN.

If the occasion calls for a special setting, there are plenty of upmarket places to dine too. Try Angler’s beautiful modern dishes, sample East Asian cuisine at Mber or sample British classics with a contemporary twist at Lyle’s.

From expansive boardrooms to cosy spots for socials and brainstorms, there are meeting rooms in East London for every occasion. Head to The Loading Dock, Algate Suite or character-filled The Library for an intimate meeting. You can also opt for a room with a view at Vancouver on Canada Square or Royal Victoria Dock.

Other amenities in East London

Looking to indulge in a bit of retail therapy? There are plenty of places to shop in East London. Head to Stratford, and you’ll have two major centres to explore, with both Stratford Shopping Centre and Westfield Stratford City to choose from. Designer boutiques and high street stores sit alongside one another, as well as eateries aplenty. Shoreditch High Street is also well worth a visit, especially if you’re looking for independent or local brands.

Love to work out? There are plenty of fitness centres in East London, from Anytime Fitness Bow to F45 Training Stratford to Gymbox Stratford. You can also head to the Olympic Park, where you’ll find outdoor gym facilities.

Stratford’s Olympic Stadium, which was the main base of the glorious 2012 Olympic games, can hold up to 60,000 football fans or an incredible 80,000 concert-goers.

One of London’s biggest plague pits was dug under what is now Aldgate Station. It’s thought around 1,000 people were laid to rest there.

Shoreditch may have a cool reputation now, but it’s thought that its name is derived from ‘Sewer Ditch’, as it was one of the filthiest areas in the city until the 20th century.

Long-running TV soap Eastenders takes a lot of inspiration from the real east end of London. Albert Square itself is based on the real-life Fassett Square, and the market is based on one in Dalston.